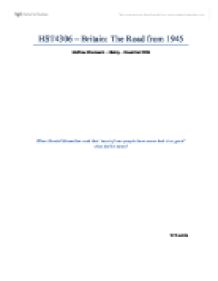 When Harold Macmillan said that most of our people have never had it so good what did he mean?

HST4306 - Britain: The Road from 1945 Matthew Woodward - History - November 2009 When Harold Macmillan said that 'most of our people have never had it so good' what did he mean? 1818 words It was estimated that in 1947 that there were a mere ten self-service stores throughout Britain. This figure rose to three thousand by 1956, quadrupled to twelve thousand in 1962 and doubled again to twenty four thousand by 1967. The sale of frozen foods doubled between 1955 and 1957, and doubled again by 1960. By the end of the fifties, forty two million loaves of sliced bread were being sold each year throughout the UK and the growth of the tea bag was extravagant, as Tetley's Tea opened in 1952 and commanded three quarters of the market by the early sixties. Other products such as American influenced 'soda' was being commercialized, and Britain saw the development of produce such as newly promoted 'health drinks' such as Iron Bru, Vimto Tizer, Coca-cola and Pepsi. With the large growth acceleration of Sainsbury's supermarket in the 50's and the end of food rations in 1954, the food consumer market was now open and fully operational. ...read more.

They became more and more able to do various things that they would never dream of doing. A Cornish man described that, "once I acquired a car out came the map and we were able to go place we'd only dreamed of before... it was possible to go to the Lake District and Scotland, it was like going to a foreign land. You were seeing things you'd only read about in a book."3 This man's view is exactly what the feeling of the affluent society was all about at the time, especially as they became highly intrigued and their sense for discovery positively developed as they now had the opportunity to achieve things that they could only have been described as a dream. Conversely it was the uprising of a society that wanted increasing amounts of time dedicated to personal leisure. It was obvious that the growth of the television allowed people to do just that, however the amount of time gained through the technological improvement of household appliances was becoming more and more noticeable. The washing machine saved considerable amounts of time and also reduced the amount of manual labour as did many others such as the hoover. ...read more.

The question to ask is why exactly did this boom suddenly happen? There are many answers; however it would be reasonable to conclude that it is the generation that grew between both World Wars that had never felt the feeling of comfort. The beginning of the nineteenth century demonstrated accelerated social change, where nothing ever properly settled, and it could be argued that it was only after the Second World War that the feeling of settlement through social exhaustion that people began to believe in society finally being able to find a constant positive rhythm in their lives. In conclusion, it would be fair to argue that British society was advancing at a rapid pace. The consumer societies saw rapid development of everything surrounding them, and were taking full advantage of the new luxuries. Availability was becoming a factor that grew on the nation, and people started having the option of getting things when and wherever they felt like it. Harold Macmillan was not wrong in stating that our society has 'never had it so good', because the simple truth of the matter is that they haven't, and it is through the consumer boom that this statement can be proved correct. British society had never been so prosperous, and people were starting to enjoy the advantages of social improvement. ...read more.