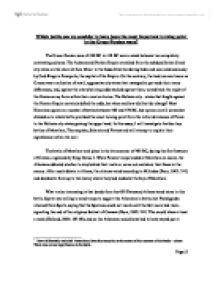 Which battle can we consider to have been the most important turning point in the Greco-Persian wars?

Which battle can we consider to have been the most important turning point in the Greco-Persian wars? The Greco-Persian wars of 498 BC to 448 BC were a clash between two completely contrasting cultures. The Achaemenid Persian Empire stretched from the subdued Ionian Greek city states on the shore of Asia Minor to the Indus River bordering India and was ruled zealously by God-Kings in Persepolis, the capital of the Empire. On the contrary, the land we now know as Greece was a collection of small, aggressive city states that managed to put aside their many differences, and, against the overwhelming odds stacked against them, turned back the might of the Persian army from within their own territories. The Hellenic city - states that fought against the Persian Empire certainly defied the odds, but when and how did the tide change? Most Historians agree on a number of battles between 490 and 479 BC, but opinion is still somewhat divided as to which battle provided the exact turning point from the initial dominance of Persia to the Hellenic city states gaining the upper hand. In this essay, I will investigate the four key battles of Marathon, Thermopylae, Salamis and Plataea and will attempt to explain their significance within the war1. The battle of Marathon took place in the late summer of 490 BC, during the first Invasion of Greece, organised by King Darius I. When Persian troops landed at Marathon en masse, the Athenians debated whether to stay behind their walls or come out and show their faces to the enemy. After much debate in Athens, the citizens voted according to Miltiades (Burn, 1962: 241) and decided to front up to the enemy where they had landed at the bay of Marathon. What is also interesting is that (aside from the 600 Plataeans) Athens stood alone in this battle. Sparta was willing to send troops to support the Athenians in battle, but Pheidippides returned from Sparta saying that the Spartans could not march until the full moon had risen - signalling the end of the religious festival of Carneia (Burn, 1962: 240. ...read more.

are killed trying to capture it (Burn, 1962: 419; Cartledge, 2007, 150; Herodotus, 7, 224). When the Immortals approached from the Anopea path, the Greeks retreated to the Kolonos hill, where they were all promptly surrounded and were slain by arrow fire, except for the Thebans who surrendered (Herodotus, 7, 225). The Battle of Thermopylae was a definite defeat for the Greek Allies, and one that could have actually been better for them. Perhaps, as Burn, and Cartledge all suggest, a greater detachment of Hoplites guarding the Anopea path could well have stopped the Immortals (Burn, 1962: 413/7; Cartledge, 2007: 147) from enveloping the Greeks. The Phocians posted there were enough to stop ambitious sorties, on the basis that the Persians had not been informed of a proper path. The Greeks had only managed to hold the strongest point above the Isthmus for three days, thanks in part to the somewhat reluctant nature of the Spartan Ephors to send reinforcements north (Burn, 1962: 421, Lazenby, 1993: 136); perhaps as a result of division at home (Grant, 1961: 14). So a underwhelming compromise was made. Even the smallest of troop reinforcements would have helped. The Greeks at Thermopylae only had to hold on for another ten days until Carneia ended in Sparta until proper reinforcements could be sent. Given the topography of the battlefield, this was not impossible. Lest we look on Thermopylae with a unfavourable view, Leonidas' actions set a precedent for the war. Herodotus states that some 20,000 Persians were killed by the Greeks at the hot springs - a tenth of the 200,000+ strong army (Herodotus, 8, 24; Cartledge, 2007: 150). Secondly, the sacrifice of Leonidas' 300 and 700 Thespians allowed the retreating Greek contingents to withdraw safely. But perhaps the most important factor is that every soldier who fought at Salamis and Plataea afterwards would remember the actions of those men at Thermopylae and use their memory to fight against the Persians with greater courage; "free men" who died to protect their way of life was a potent inspiration. ...read more.

Maybe his hand was forced (Hignett, 1963: 336), but he knew he needed a great victory here to splinter the alliance and leave Greece vulnerable. Attacking was a risky option, but it could have brought him the victory he needed. With his defeat at Plataea, the defence of Greece was concluded (Lazenby, 1993: 247). Plataea was the definitive end to the Persian invasion. There are a many reasons as to why the Greeks won; but which battle did the Greeks use these elements in their favour enough to turn the tide of the war in their favour? Many scholars suggest the battle of Salamis to be the crucial turning point of the war - Strauss and Holland for example (2004: 294; 2005: 399), and in some ways this is correct. Had Salamis been lost by the Greeks, the defence at Corinth would have been flanked, but it was not a foregone conclusion that they would have been defeated there (Cartledge, 2007: 166) - as we have seen, the hoplite held superiority over the lighter Persian infantry. If the Greeks knew they were about to be attacked at the sides, they could have organised their battle lines accordingly. Effectively, it meant is that the Peloponnese was safe (Lazenby, 1993: 197). As Cartledge quite rightly points out, Marathon, Salamis and Thermopylae were battles that marked important social and cultural changes - the continuation of Greek direct democracy and the belief that the Hellenic city states could beat Persia (Cartledge, 2007: 166). The military turning point was the battle of Plataea. As long as Persians remained on their soil, the Greek poleis were not safe (Bengston, 1969: 60; Lazenby, 1993: 251). With the defeat of Mardonius at Plataea, the invasion was over. Mardonius still had sufficient troops to outnumber the Greeks and to conquer them (Cartledge, 2007: 166). Mardonius was close to winning at Plataea. If the coalition splintered, Mardonius could have picked off each polis one by one. The Greeks ended the threat of conquest at Plataea, and took the offensive to Persia afterwards. ...read more.