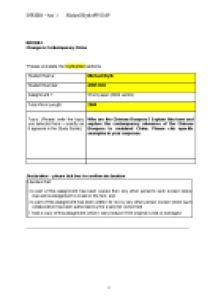 ﻿INR3004 ? Ass. 1 Michael Blyth d9913169 INR3004 Change in Contemporary China *Please complete the highlighted sections. Student Name: Michael Blyth Student Number: d9913169 Assignment 1: Short paper (2000 words) Total Word Length: 2000 Topic: (Please write the topic you selected here ? exactly as it appears in the Study Guide). Who are the Chinese Diaspora? Explain this term and explore the contemporary relevance of the Chinese Diaspora to mainland China. Please cite specific examples in your response. Declaration ? please tick box to confirm declaration I declare that: no part of this assignment has been copied from any other person's work except where due acknowledgement is made in the text, and no part of this assignment has been written for me by any other person except where such collaboration has been authorised by the examiner concerned. I hold a copy of this assignment which I can produce if the original is lost or damaged. ________________ ________________ *Do not delete this page. MARKING CRITERIA AND FEEDBACK FOR ESSAYS ________________ NB: The following criteria reflect High, Low and Medium standards. Structure Introduction: 1. Well defined and justified 2. Adequately defined, but not well justified 3. No coherent definition or justification /10 Body: Argument/Analysis: 1. Logical and coherent development 2. Adequate, but with limitations 3. ...read more.

The latter half of the 20th century had seen a shift in Chinese emigrants from a largely enslaved/indentured labour force to a labour force with professional skills or technical trade training. The vast majority of the Chinese Diaspora originates from the southern provinces of China whilst others spent brief periods in Taiwan and Hong Kong before emigrating abroad. Deng?s Open Door Policy of the late 1970?s seen an increase in emigration and also an increase in foreign direct investment by the Chinese Diaspora. The Chinese state no longer viewed the Chinese Diaspora with distrust, rather, they seen them as a political and economic vehicle with the wherewithal both economically and politically to play a vital role in the industrialisation and modernisation of China. In fact, the Chinese government undertook a period of actively engaging with the Chinese Diaspora (Cohen, 1997). Mansingh has identified several key themes within the People?s Republic of China (PRC) policies towards the Chinese Diaspora: the maintenance of nationality and citizenship of the Chinese Diaspora as paramount, the protection of the rights of the Chinese Diaspora, the attraction of capital, knowledge and skills to further China?s modernisation, and the pursuit of, and maintenance of China?s strategic and geopolitical influence in South East Asia (Mansingh, 1991). The overriding patriarchal theme seen within these policies could be construed as a form of socialistic idealism; however, when considered within the context of ...read more.

Whilst a broader discussion of the SEZ?s is not within the constraints of this paper it must be said that their role, specifically that of Taiwan & the emigrant rich regions of the south has been crucial to attracting this investment. The rise in prevalence of Diaspora investment in China has seen a complete turnaround of its southern provinces to what is now a rapid period of export driven growth. It must be said also that the reciprocity shown between the PRC and the Chinese Diaspora; from the welcoming hand extended by the PRC post open door policy to the return home of the many overseas Chinese specifically to aid the states rise. Problems do remain however; the issue of human rights will continue to be an issue for some time for many overseas Chinese and may inhibit their engagement with the homeland. The level of freedom afforded to overseas Chinese by their host nations is not found upon their return home. Domestic dissent is still quashed with haste and detractors are often jailed. The China-Taiwan divide also remains a very prevalent issue. Having said that, the very impetus of this discussion has been to better explain the relationship the Chinese Diaspora has had on mainland China and it is clear that for without the overseas Chinese the PRC would clearly not be in the position it is today economically or socially. ...read more.