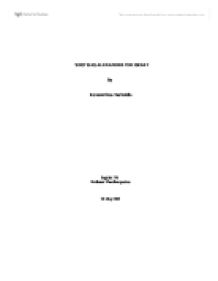 Who was Alexander the Great.

WHO WAS ALEXANDER THE GREAT By Konstantinos Tachtsidis English 116 Professor Theofanopoulou 30 May 2001 Tachtsidis 1 The life and character of Alexander the great is perhaps the most exciting mystery of the history, despite the plethora of information which we have about him is almost impossible to define his persona. Many of the sources that are available refer to Alexander as a butcher and megalomaniac and place him in the same list with Stalin and Hitler, while others see him as a generous military genius who had the great vision to unite the world under a peaceful ruling. Characteristics such as charismatic and kind but also ruthless and alcoholic have been also attached to Alexander's personality. It is a fact that there is a big confusion and contrast between the sources about Alexander's life, but there is some information, which are accepted as facts and lead us to answer the question of who was Alexander the great? (Alexander the great). It is said that Alexander was born on 20th of July in 356 B.C. in Pella the capital of the Macedonian kingdom, his parents were Philip and Olympias (Alexander's birth and parentage). The Greeks at that time used to say that everyone who's not Greek is a barbarian, so Alexander grew up in a not so civilized environment, but it was obvious that this young boy had a special personality. There is a narration about some Persian ambassadors who visited Pella but Alexander's father king Philip wasn't there, so they met with the very young prince who was asking them all the time about the geographical elements of their country and that impressed the Tachtsidis 2 Persians very much. "The famous tale of Alexander's taming of the horse Bucephalus is in the same vein. The horse brought to Philip by a Thessalian breeder and was named after his distinctive brand mark: 'ox-head'. ...read more.

A big issue concerning the life of Alexander the great is his sexuality. It is known that he had a wife and a child, that's why many historians agree that he was a heterosexual. But this is not true because there are many sources depicting Alexander as bisexual or homosexual. We don't have many documents Tachtsidis 7 about his sexuality because he had a small number of lovers and they had never talked about it. In order to decode Alexander's sexuality it is important to highlight his childhood. His relationship with his mother Olympias determined his sexual behavior, it is said that Alexander had an Oedipal syndrome. His father had many lovers and he divorced Olympias, Alexander who was in the middle of this situation took his mother's part and they were living together for a long time. Olympias' love for Alexander was very possessive and she didn't let other women to approach him. It is very possible that this bond with his mother affected his sexuality (Sexuality and Alexander) In ancient Greece, bisexuality was considered normal, and love of a friend was not such an odd thing, in fact it was accounted the greatest love of all. "Furthermore, relationships between men and women in Macedonia, particularly within the upper classes, differed radically from those of today, and the polygamy of the Macedonian royal house would have been quite different even from that of a private family in the Greek south. So the fact that Alexander's primary affective relationship might have been with another man is not only unsurprising, but perhaps predictable" (Alexander's sexuality) Tachtsidis 8 The person who had the bigger influence on Alexander's life was (except his mother of course) Hephaestion, his closest friend and maybe his lover. Alexander and Hephaestion were friend since they were both students of Aristotle. Hephaestion was not a great general and he didn't now much about war tactics so Alexander was always protecting him by not sending him to the battlefield. ...read more.

Tachtsidis 13 Another one incident that shows Alexander's kindness and sense of humor is his meeting with Diogenis. When the Greeks gathered in Corinth to proclaim Alexander as their leader against Persia many philosophers came to congratulate him. Diogenis was sold as a slave to Corinth by pirates and used to live in an earthenware jar, there he was met with the Macedonian king. Alexander was impressed by the view of Diogenis "and when he kindly asked him whether he wanted anything, 'yes', said Diogenis, 'I would have you stand from between me and sun'. Alexander was so struck at this answer and surprised at the greatness of the man that as he went away he told his followers, who were laughing at the moroseness of the philosopher, that if he were not Alexander, he would choose to be Diogenis" (Plutarch). Whether or not Alexander had plans for World Empire cannot be determined. He had accomplished greater conquests than any before him, but he didn't have time to mold the governments in the lands he had conquered. Undoubtedly, he was perhaps the greatest general of all time and one of the most powerful and controversial personalities. Alexander had accomplished nothing less than the spreading of Greek culture on the Asian world. Hellenistic Greece was an urban culture and the people from Asia adopted immediately the customs and the spirit of Greek culture. The cities founded by Alexander were centers of Tachtsidis 14 government and trade as well as culture and these were large cities by ancient standards (The Legacy of Alexander the Great). Can the achievements of Alexander the great and the Hellenistic period be linked with the rise of Christianity? The answer is yes. "Nowhere is this more clearly demonstrated than in the fact that the most enduring product of the Hellenistic age was the new religion of Christianity, a system of belief, symbol and ritual that still today occupies a central role in our cultural life and psychological circumstances" (From Alexander the Great to Cyberspace). [kt1] [kt1]Attention: ...read more.