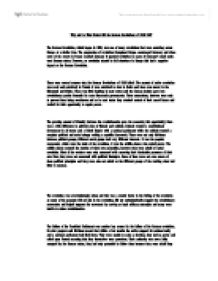 Why and to What Extent did the German Revolutions of 1848 Fail?

Why and to What Extent did the German Revolutions of 1848 Fail? The German Revolution, which began in 1848, was one of many revolutions that were occurring across Europe at a similar time. The progression of revolution throughout Europe encouraged Germany and when news of the events in France reached Germany it sparked revolution in many of Germany's small south-west German states. However, as revolution started to fail elsewhere in Europe this had a negative impact on the German Revolution. There were several reasons why the German Revolutions of 1848 failed. The amount of active revolution was small and restricted; in Prussia it was restricted to riots in Berlin and there was unrest in the Rhineland and Silesia. There was little fighting in most states and the German leaders gave into revolutionary parties demands for more democratic governments. These concessions, however were only to prevent them being overthrown and so in most states they retained control of their armed forces and waited for their opportunity to regain power. ...read more.

The revolution was overwhelmingly urban and this was a crucial factor in the failing of the revolution as many of the peasants did not join in the revolution, did not enthusiastically support the revolutionary movements and helped suppress the movement by serving as loyal military conscripts and many were hostile to urban revolutionaries. The failure of the Frankfurt Parliament was another key reason for the failure of the German revolution; its slow progress and divisions meant that within a few months the active support for national unity and a national parliament had died down. They were unable to make a decision, they had no power and relied upon Prussia meaning that they themselves were powerless. Their authority was never fully accepted by the German states, they had only pretended to follow them because they were afraid they would loose their thrones. ...read more.

All traces of the Frankfurt Parliament had been wiped away. Austria, Prussia and Russia still dominated Central and Eastern Europe and no new states had emerged. Feelings of nationalism that had been created in these years were wiped out. However, it is incorrect to presume that the period of 1848-49 was a total failure. The Revolution had swept away the leftovers of feudalism. And it had introduced a sort of Government in Prussia and after 1848 almost all the monarchies had accepted that they needed to change and modernise, even if some were still unwilling to have their traditional forms of power diluted. The revolutions helped to stir national consciousness across Germany and the revolutions also showed the Conservatives that if they wanted to win or maintain mass support they would have to show an interest to social problems of the lower classes. ...read more.