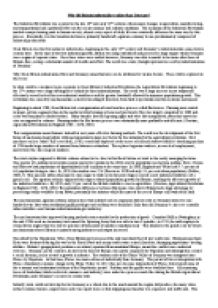 Why did Britain industrialise earlier than Germany?

﻿Why did Britain industrialise earlier than Germany? The Industrial Revolution was a period in the late 18th and early 19th centuries when major changes in agriculture, manufacturing, and transportation had a profound effect on the socioeconomic and cultural conditions. The inception of the Industrial Revolution marked a major turning point in human society; almost every aspect of daily life was eventually influenced in some way by this process. Essentially, it is the transition between a primarily handicraft, agrarian economy to one predominately composed of industrial productivity. Great Britain was the first nation to industrialise, beginning in the early 18th century and Germany?s industrialisation came about a century later. At the time of the first industrial growth, Britain was long established and possessed a huge empire whilst Germany was a region of separate states. Once these states were unified however, Germany was able to model its factories after those of Britain, thus, saving a substantial amount of wealth and effort. The result was a later, though rapid and successful, industrialisation of Germany. Why Great Britain industrialised first and Germany somewhat later can be attributed to various factors. These will be explored in this essay. In what could be considered a pre-requisite to Great Britain?s Industrial Revolution, the Agricultural Revolution beginning in the 17th century was a huge driving force behind the first industrialisation. ...read more.

A crucial factor for the development of any nation in any respect is its political stability. Great Britain was well established and unified. Britain?s highly stable politics, growing empire and decent social structure enabled them to be interested in new feats such as industry, empire building, and technological innovations. This stability also resulted in a greater receptiveness to change, compared with other European countries. The togetherness of Britain is crucial to the question as to why she industrialised before Germany and indeed, before any other nation. (Moore, 1966, 28-30) In contrast to Great Britain, Germany was very disunited and had fundamental problems with its wide array of kingdoms and dukedoms. The term ?Germany? referred to a region of multiple territories, each of which spoke the German language and of these, only Prussia and Austria were substantial economic units. Such division was perhaps the paramount set back for German economic (and in many other respects) progress. Being disunited, the little states competed with each other economically rather than in one unified output. The nation of Germany was not until created 1871, a great time after long established and prosperous Great Britain began her industrialisation. Once a unified nation, Germany?s industrialisation could now begin to grow and compared to Britain, very quickly thrive. ...read more.