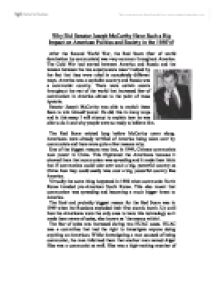 Why Did Senator Joseph McCarthy Have Sucha Big Impact on American Politics and Society in the 1950's?

Why Did Senator Joseph McCarthy Have Such a Big Impact on American Politics and Society in the 1950's? After the Second World War, the Red Scare (fear of world domination by communists) was very common throughout America. The Cold War had started between America and Russia and the tension between the two superpowers wasn't helped by the fact that they were ruled in completely different ways. America was a capitalist country and Russia was a communist country. There were certain events throughout the rest of the world that increased fear of communism in America almost to the point of mass hysteria. Senator Joseph McCarthy was able to exploit these fears to win himself power. He did this in many ways and in this essay I will attempt to explain how he was able to do it and why people were so ready to believe him. The Red Scare existed long before McCarthy came along. Americans were already terrified of America being taken over by communists and there were quite a few reasons why. ...read more.

The second case was the case of the Julius and Ethel Rosenberg, a married couple accused of selling atomic secrets to the Russians. They denied it but were convicted anyway and executed for treason in 1953. This worried the public because if a nice, ordinary couple like the Rosenbergs were communist, how are you meant to know who else is or isn't? So when McCarthy came along, fear of communism was already very ongoing throughout America. This was the main reason people were so willing to believe him without question. They were ready to resort to any means possible to expose 'the enemy within'. McCarthy became famous in 1950 when he claimed to have a list of 205 known communists (although it was dropped to 57 after investigations) and, because of all the reasons above, no-one ever questioned him. This meant he never had to produce any evidence to any of his accusations. He attacked many public officials and ruined almost as many people's lives, as well as their careers. When the Senate Committee criticised him he accused the chairman, Senator Tydings. ...read more.

The after-effects of the McCarthy era were very great and very long lasting. Around 9,500 civil servants lost their jobs and 15,000 resigned. 600 teachers were sacked and many Hollywood actors and screenwriters were 'blacklisted', meaning they could never work again. People were afraid to help the poor, blacks or trade unions as people were suspicious of these acts and labelled the people responsible as 'commies'. This suspicion led to the persecution of innocent people. There was also the formation of many vigilante-style organisations that took the law into their own hands. The government produced leaflets and films about the danger and McCarthyism even led to the Communist Control Act of 1954, which banned the communist party altogether. So, to summarise, McCarthy had such a big impact on the USA that, even after his era, there was still a huge fear and hatred of communism. It made many people very afraid to show their political views because of the lack of tolerance. As America calls itself the 'land of the free', McCarthyism is a great example of just how much a single man can do to destroy a country from within. ...read more.