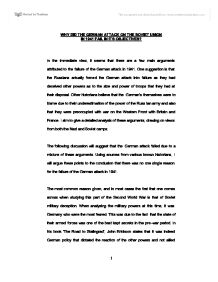 Why Did the German Attack On the Soviet Union in 1914 fail in its objectives?

WHY DID THE GERMAN ATTACK ON THE SOVIET UNION IN 1941 FAIL IN ITS OBJECTIVES? In the immediate view, it seems that there are a few main arguments attributed to the failure of the German attack in 1941. One suggestion is that the Russians actually forced the German attack into failure as they had deceived other powers as to the size and power of troops that they had at their disposal. Other historians believe that the German's themselves were to blame due to their underestimation of the power of the Russian army and also that they were preoccupied with war on the Western Front with Britain and France. I aim to give a detailed analysis of these arguments, drawing on views from both the n**i and Soviet camps. The following discussion will suggest that the German attack failed due to a mixture of these arguments. Using sources from various known historians, I will argue these points to the conclusion that there was no one single reason for the failure of the German attack in 1941. The most common reason given, and in most cases the first that one comes across when studying this part of the Second World War is that of Soviet military deception. When analysing the military powers at this time, it was Germany who were the most feared. This was due to the fact that the state of their armed forces was one of the best kept secrets in the pre-war period. ...read more.

It had been well documented that Hitler had much personal contempt for Stalin; most historians thought that this was born from envy and jealousy and they may be right. Hitler's character was not too different from that of Stalin; they were both very mean and harsh men who would not let anything stand in the way of their goals. The only difference being that whereas Stalin's goals towards the Soviet Union were relatively insular, Hitler had the most grandiose plans for world domination. So to the Second World War and the involvement of Stalin's Soviet Union in a war against a German force strongly rejuvenated by Hitler and his propaganda machine. However, it was not for some time that Germany actually concentrated on trying to break down the Russian Army. Hitler and his army were very busy trying to defeat the French and the British on the Western Front, and as Stalin had made no immediate interventions to stop the German machine, Hitler believed he at least had time on his side, if not Russia herself. However Stalin was merely biding his time. He knew the real power of the German Army and that at the outbreak of war that there was no way that the Soviet Union could match Hitler's military force at that time. Therefore, it was Stalin's view that by fooling Hitler, it would give him much needed time to continue rebuilding the Red Army into a force that could match Hitler's Germany. ...read more.

Stalin knew what Hitler was like; he was extremely 'gun-ho' and liked to rush things, he didn't believe in waiting for opportunities, he would rather go out and create them. We can conclude therefore, with the help of the evidence given by Erickson and Keegan, that indeed the many reasons given for the failure of the German attack in 1941 were all true. Military deception was not that high on the Soviet agenda, but did come into play. As did the Germans being preoccupied with the Western Front, although by this stage of the war, most of their work to the west was done. However the reason that is undoubtedly the most viable for this 'Russian victory' is that of poor German military intelligence and therefore the Russians having the higher level of military knowledge at the time. The Germans were so unaware of Stalin's war games and the rebuilding of the Red Army that they were taken successfully by surprise. We can therefore see that in this case, the military politics and intelligence of the Russians was far more effective in the long-term that the sheer force of the German Army. This may be down to Hitler and his naivety when it came to the military but the most likely explanation is that the Russian intelligence units, who surveyed the German army to find their unapparent weaknesses and who also advised Stalin of the right time to come out and prove what the Soviet Union had in terms of military power, were the real heroes of this 'Soviet victory'. ...read more.