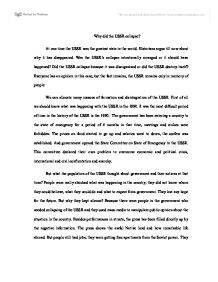 Why did the USSR collapse?

Why did the USSR collapse? At one time the USSR was the greatest state in the world. Historians argue till now about why it has disappeared. Was the USSR's collapse intentionally arranged or it should have happened? Did the USSR collapse because it was disorganized or did the USSR destroy itself? Everyone has an opinion in this case, but the fact remains, the USSR remains only in memory of people. We can allocate many reasons of formation and disintegration of the USSR. First of all we should know what was happening with the USSR in the 1990. It was the most difficult period of time in the history of the USSR is the 1990. The government has been entering a country to the state of emergency for a period of 6 months in that time, meetings and strikes were forbidden. The prices on food started to go up and salaries went to down, the curfew was established. ...read more.

So from this point of view everything seemed very perfect, but it was not so easy to hide the truth from the population, just continuing to give them what they expected to get from government. Reading all reasons about the collapse of the USSR above, I still believe in the idea that there are some facts which can prove other point of view, that the USSR was not fated to be destroyed and there was a possibility to undergo all transformations without such outcome as destroying one of the greatest state in the history. Many people think that the USSR was empire, and all empires break up sooner or later. But the USSR wasn't empire. We can easily compare the USSR with the Great Britain at this point of view. Any empire has accurate structure. There is a main territory and the subordinated territories - colonies. Citizens of these territories are strongly differ in the rights. ...read more.

If it so why the United States haven't collapsed during great depression or Chinese Republic, which didn't collapse at the time of a cultural revolution? Economic difficulties weaken the state and strengthen action of the other factors which promote collapsing of the state, but in itself they couldn't be at the bottom of country collapsing. In conclusion it is possible to understand that the reasons for disintegration were more than we could present to ourselves. There is the biggest fault of government working which led to collapsing of the USSR. The situation in the country was very difficult but there were some ways how to prevent the collapse of the USSR. And this influenced on people's view about their own country and about the government of their country. Usual people were watching how their country were destroyed mostly by the USSR's government. And they didn't really know what would be in the future, but nobody expected that the USSR would collapse and it would divide into different countries, which in the future would have difference in many things of their lives. ...read more.