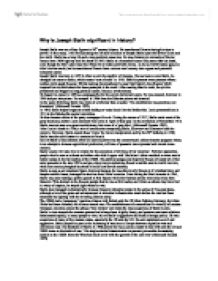 Why is Joseph Stalin significant in history?

Why is Joseph Stalin significant in history? Joseph Stalin was one of key figures in 20th century history. He transformed Russia during his time in power. In this essay, I will be discussing the life and influence of Joseph Stalin upon the Soviet Union and the world. Stalin has a long life and a long political career too. He was dictator (or comrade) of Soviet Russia from 1929 right up until his death in 1953. Stalin is a household name fifty years after his death, even though he didn't start wars like Hitler did or make such bold moves. As far as world history goes, he didn't do that much, but he transformed Russia from a minor rural country into a great and powerful industrial nation. Joseph Stalin was born in 1879 in what is now the republic of Georgia. His real name is not Stalin, he changed his name to Stalin, which means 'man of steel' in 1910. ...read more.

In the revolution of November 1917, Stalin was not seen as a great revolutionary, but more of a 'grey blur'. (Microsoft Encarta 1995) After Lenin's death in 1924, a trio of communists comprising Stalin, Zinovyev and Kamenev lead the country. However, Stalin ousted these 'rivals' by clever manipulation and by his 50th birthday in 1929, Stalin was the sole dictator in communist Russia. One of Stalin's first schemes when he came to power was the controversial collectivization program where, in an attempt to increase agricultural production, millions of peasants were uprooted and moved cross-country. Stalin's name will also live in infamy for the execution of millions of his 'enemies'. Political opposition, people who he saw as a threat and others who didn't agree with 'Stalinism' either vanished or were sent to labour camps in the far reaches of the USSR. ...read more.

The USSR had a 'temporary' wartime alliance with Britain and the US when fighting Germany, but when Hitler had been defeated, the alliance turned sour. The establishment of communism in virtually all eastern European countries coined the phrase 'Iron Curtain' and made the west suspicious of Stalin's aims. Stalin's view towards the western powers had always been slightly frosty, and postwar east-west relations deteriorated rapidly, in many people's view, due to Stalin's aggressive and hostile foreign policy. He was suspicious of many of the western states, especially the US and the UK. He saw capitalism as evil and aggressive. Stalin played his part in the increasing of tensions in Europe between capitalist west and communist east. His blockade of Berlin in 1948 proved he was a serious leader to deal with and the US and USSR were on the brink of war. 'His single-minded determination to prevent yet another devastating assault on the USSR from the West had much to do with the growth of the cold war' (Microsoft Encarta 1995) ...read more.