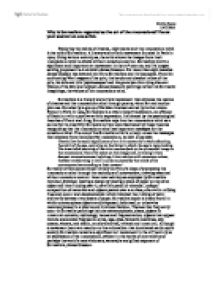 Why is Surrealism regarded as the art of the unconscious? Focus your answer on one artist. (James Gleeson)

Why is Surrealism regarded as the art of the unconscious? Focus your answer on one artist. Exploring the realms of dreams, nightmares and the unconscious mind is the role of Surrealism. A literary and artistic movement founded in Paris in 1924. Using various techniques, the artist allows the images from their unconscious mind to evolve without conscious control. Surrealism is still a significant and important art movement in the 21st century, and it's longest serving proponent is Australia's James Gleeson. For more than eight decades James Gleeson has devoted his life to Surrealism and its ideologies. From his confronting War imagery of the 40's, the heroic and classical nudes of the 50's, his 60's and 70's 'psychoscapes' and his grand yet disturbing visceral visions of the 80's and beyond; James Gleeson's paintings reflect his Surrealist imaginings, the visions of his unconscious mind. Surrealism is a literary and artistic movement that explores the realms of dreams and the unconscious mind through poetry, visual art and motion pictures. Founded by a group of Parisian intellectuals led by writer Andre Breton in Paris in 1924, Surrealism is a revolutionary movement, an offshoot of Dada but with a positive artistic expression. Influenced by the psychological theories of Freud and Jung, Surrealism taps into the unconscious mind as a source for its creativity. Surrealist artists were fascinated by these theories recognizing that the unconscious mind has important messages for the conscious mind. The role of the Surrealist artist is to help us see the messages that emanate from the collective unconscious. As Carl Jung says: Therein lies the social significance of art: It is constantly at work educating the spirit of the age, conjuring up the forms in which the age is more lacking. ...read more.

The Platonic idea of man's beauty reflecting goodness-dominated, this was reflected in the style change mid-century. I believed Michelangelo and the Platonists for a while and later rejected it.10 Memorable paintings include The judgement of Paris 1950, Spain 1951, and Crucifixion 1952. Italy11, a monumental work painted during this time depicts history, ancient sculptures, the cultural achievements of western society, yet its ruins also depict man's destructive nature. Italy viewed in the 21st century could also represent contemporary Baghdad and the smashed statue of Saddam Hussein. Gleeson felt on visiting Italy a: ...melancholy sense of loss, of ruined splendour, of a past wrecked not only by time, but by human indifference, barbarism or an instinct for destruction.12 Gleeson's abstract triptych work Signals from the frontier13 painted in 1957/8 was a 'signal' of future works, a change of style. The 'frontier' of Gleeson's imagination produces a bizarre seething mixture of viscera, bone, membrane and unidentifiable objects. Ronald Millar described it thus: His triptych grows strangely, one visceral part out of another, landscape from body, membrane from bone, cages from ribs ...Glottal shapes and mouths and tongues interchange...a bizarre composite of organic life throbbing away at Gleeson's frontier of the mind.14 This visual subconscious imagery was achieved using decalcomania and the palm of his hand. The new landscape, one from Gleeson's unconscious, is a forerunner of his psychological and philosophical landscapes, his 'Psychoscapes'. Gleeson's 'Psychoscapes' painted during the 60's and 70's undergo their own metamorphoses. The 60's images were of surreal landscapes dominated by heroic male nudes whose homoeroticism is clearly evident. Gleeson portrayed Greek myths and legends where man attempts to free himself and others through heroic deeds. ...read more.