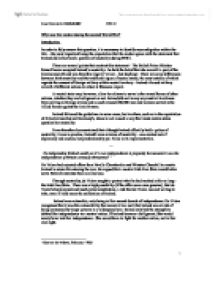 Why was Eire neutral during the Second World War?

Why was Eire neutral during the second World War? Introduction. In order to fully answer this question, it is necessary to identify any ambiguities within the title - the most important being the expectation that the reader agrees with the statement that Ireland did in fact hold a position of neutrality during WW2. There are several points that contrast this statement - The British Prime Minister himself never accepted Ireland's neutrality- he held the belief that she was still a part of the Commonwealth and was therefore legally 'at war - but skulking'. There are some differences between Irish neutrality and the traditional types of neutral states, the most notable of which regards the consent of foreign military within neutral territory - Ireland allowed military aircraft of different nations to refuel at Shannon airport. A neutral state may, however, allow its citizens to serve in the armed forces of other nations, whether they are belligerent or not. Ireland did not in any way restrict its citizens from serving in foreign armies and as such around 200,000 men and women served in the Allied Forces against the Axis Powers. Ireland followed the guidelines in some cases, but in others, such as in the repatriation of Allied airmen but not Germany's, chose to act in such a way that made certain states question her neutrality. ...read more.

In 1939, Ireland was largely dependent on Britain as far as external trade and communications. In particular, Ireland only controlled five percent of her own shipping, and relied on Britain for ninety percent of her exports. Ireland was largely dependent on British markets and trade for Her economic survival - the effects of another disagreement like the recently solved Anglo-Irish Trade War would put her in a very bad position indeed. On the outbreak of war, it was agreed that all cable communications to and from Ireland were routed through London, and were as such subject to the censorship division of Britain's Government Communications Headquarters.9 There was no way for Ireland to make a truly clean break from Britain considering Her ties to the former ruling nation. If Ireland were to have taken a position of belligerence --- 'From the moment this war began, there was...only one policy possible, neutrality. Any other policy would have divided our people and for a divided nation to fling itself into this war would have been to commit suicide'10 Domestically, neutrality was highly popular and seen as a policy that was both sensible and cautious. A phrase used many times over in interviews and press was that neutrality was 'natural given our history'11, and there seemed to be an almost complete consensus within Ireland that given the recent troubles of the War of Independence and the Civil War, neutrality was the most obvious choice for Ireland. ...read more.

Irish neutrality during the Second World War was a policy based firstly on principle, secondly on political practicality, and thirdly on the fear of the consequences of a war upon a virtually defenceless and dependent state. Resentment of Britain, pride in Irish individuality, recent memories of the First World War, the Anglo-Irish War and the Civil War, as well as the fear of aerial bombardment all combined to create a general agreement against becoming involved in yet another conflict. Above all, it was a practical stance decided by military and political necessities, not an ideological declaration or the expression of a moral choice. Neutrality expressed the Irish government's responsibility for the survival of the state and the welfare of its citizens. 1 Eamon de Valera, February 1920 2 Eunan O'Halpin 3 Wills, Clair 4 Fanning, Ronan, 'The British Dimension' in, The Crane Bag - Ireland: Dependence & Independence, Vol. 8, No. 1(1984), pp. 41-52 5 Eunan O'Halpin 6 Dail Debates 7 D�il Debates 8 Collins, M.E., 1993, Ireland 1968-1966, Dublin: the Educational Company of Ireland. p. 371 9 Hills, Jill 10 Eamon de Valera, Speech on Eire Neutrality, Cork, Ireland, December 12 1941. 11 Wills, Clare, p7/8 12 Eunan O'Halpin 13 Washington Post. 'Moral Myopia'. In Editorials, p6. (Washington, DC: The Washington Post) May 5 1945 ?? ?? ?? ?? Zoe Edwards B00545482 HIS101 1 ...read more.