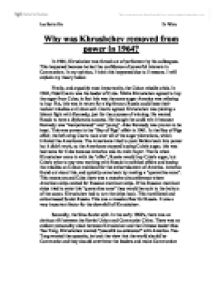 Why was Khrushchev removed from power in 1964?

Why was Khrushchev removed from power in 1964? In 1964, Khrushchev was forced out of parliament by his colleagues. This happened because he lost the confidence of powerful interests in Communism. In my opinion, I think this happened due to 5 reasons. I will explain my theory below. Firstly, and arguably most importantly, the Cuban missile crisis. In 1962, Fidel Castro was the leader of Cuba. Nikita Khrushchev agreed to buy the sugar from Cuba; in fact this was the same sugar America was refusing to buy. But, this was in return for a big favour; Russia could base their nuclear missiles on Cuban soil. Castro agreed. Khrushchev was picking a blatant fight with Kennedy, just for the purpose of winning. He wanted Russia to have a diplomatic success. He thought he could win it because Kennedy was "inexperienced" and "young". Also Kennedy was proven to be inept. This was proven in the "Bay of Pigs" affair in 1961. In the Bay of Pigs affair, the left-wing Castro took over all of the sugar plantations, which irritated the Americans. ...read more.

In his power struggle, he took the side of the hard-line Stalinists, in favour of traditional heavy industries. This made him popular among colleagues. However, when he had complete control of Russia, he changed his views and took the side of "cotton-dress industrialisation", this meant more emphasis on consumer goods. There was an overthrowing attempt but it fell through. Khrushchev was very devious but he got his own way and there was more emphasis on consumer goods in industry. His main reform was in 1958 when he introduced 105 regional economic councils "the sovnarkhozy". Every sovnarkhoz had to manage the affairs of its region. The sovnarkhozy was just something for Khrushchev to use to hide behind the "metal-eaters". The sovnarkhoz was discarded after Khrushchev's downfall. There were low wages in industry, no overtime but there was no unemployment. This led to over manning in factories. Fourthly, and again most importantly, the Virgin Lands project. When Khrushchev took over, Russia was finding it hard to feed itself, due to a large population increase. ...read more.

Lastly, Was Khrushchev's personality and style to blame for his downfall? Below, I will make a table of his personality positives and negatives. + - Energetic Dynamic Gregarious Good humoured Uncouth Hot tempered Impulsive Foul mouthed Undignified Embarrassing As you can see, the negatives weigh out the positives, his colleagues got particularly tired of him by 1964. I will demonstrate a couple of examples of Khrushchev's behaviour. In 1962, Khrushchev was invited to an art exhibition by Bilyutin. He went into the gallery and inspected the paintings, while inspecting he swore unpleasantly about the work he was looking at and he said, "a donkey could do better with its tail" and "it looks like horse manure". In 1960, Khrushchev attended the UN general assembly in New York. When Prime Minister Macmillan of the UK was speaking, Khrushchev did not agree with him and he took his shoe off and banged it on the table in front of all the leaders. This was very degrading for Russia. All of these reasons played a part in the downfall of Nikita Khrushchev. His colleagues forced him into retirement. He left as leader of the Communist party in late 1964. ?? ?? ?? ?? Lee Bettis 10n Dr White ...read more.