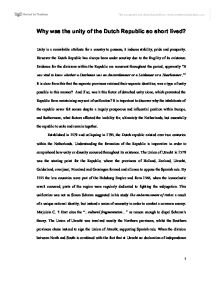 Why was the unity of the Dutch Republic so short lived?

Why was the unity of the Dutch Republic so short lived? Unity is a remarkable attribute for a country to possess; it induces stability, pride and prosperity. However the Dutch Republic has always been under scrutiny due to the fragility of its existence. Evidence for the divisions within the Republic are recurrent throughout the period, apparently "It was vital to know whether a Dutchman was an Amsterdammer or a Leidanaar or a Haarlemmer."1 It is clear from this that the separate provinces retained their separate identities, was a type of unity possible in this manner? And if so, was it this factor of detached unity alone, which prevented the Republic from maintaining any sort of unification? It is important to discover why the inhabitants of the republic never felt secure despite a largely prosperous and influential position within Europe, and furthermore, what factors affected the inability for, ultimately the Netherlands, but essentially the republic to unite and remain together. Established in 1579 and collapsing in 1795, the Dutch republic existed over two centuries within the Netherlands. Understanding the formation of the Republic is imperative in order to comprehend how unity or disunity occurred throughout its existence. ...read more.

It is true however, that the Stadhouder had only limited power based on a number of Factors. Primarily any desire for a monarchical type position depended from individual to individual, additionally there was no system in place to implement decisions that might have come out of the Hague, the meeting place of the provinces' representatives. Effectively influence of merchants, popular opinion, war and factions were to dictate the future of the Netherlands. No Stadhouder ever held absolute power or indeed had the means to impose it, the Republic did not unite in this way. The Netherlands held such a hegemonic position in the early seventeenth century within Europe because of their immense trading influence. The Republic formed the core of all the major thriving centres inside of the Netherlands at this time, and was, as trade turned more to the sea and further from land, strategically and financially well placed to exploit trading options. To the Atlantic was fishing, to the Baltic grain, timber and iron and to Africa and the East Indies there lay trade in slaves, spices and luxury goods. This early success was to be the Achilles heel of the Republic as it incensed both the English and French that their domination was being challenged. ...read more.

't Hart infers that "the example of the Dutch Republic wipes out this casual regularity"6 and indeed it does. This non-absolutist state that developed could have both increased or decreased the unity of the Republic. If the provinces were to find common ground and goals, then an ideal situation might have developed, and unity possibly assured. And if in fact the area remained separated and linked only by a signed 'Union' and the occasional coming together for war, prosperity may have remained a distant dream. What the Dutch Republic actually managed to do, was find some middle ground during the seventeenth century. The provinces retained their own identity and separate goals, yet provided a support structure in case any one were to collapse. They endured many years of wars, without collapse and amazingly without unification, different provinces fulfilled different requirements, for example Amsterdam provided funds, and through the one common aim: defence of their provinces, and there for the republic, they managed to prosper during adverse times. The unity of the Dutch Republic was not short lived it simply never existed. Unity in the sense of identity, nationalism and government were very hard to find in the Netherlands in the seventeenth century. Resilience and desires for success and peace were ever present and resulted in over two centuries of the regime. ...read more.