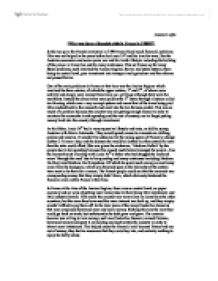 Why was there a financial crisis in France in 1788/9

Jannine Layhe "Why was there a financial crisis in France in 1788/9?" In the run up to the French revolution in 1789 France faced much financial problems. This was not helped in the years before by Louis 15th and his love for wars, like the Austrian succession and seven years war and his lavish lifestyle including the building of the palace in Versailles and his many mistresses. This set France up for many future problems, such involved the Ancien Regime, the tax and estate system, there being no central bank, poor investment into transport and agriculture and the reforms not passed for tax. One of the main problems in France at that time was the Ancien Regime which involved the three estates, of which the upper estates, 1st and 2nd, of whom were nobility and clergy, were exempt from taxes as a privilege although they were the wealthiest. Instead the direct taxes were paid by the 3rd estate through a system called tax-farming, which was a very corrupt system and meant that of the taxes being paid little reached back to the monarch and went into the tax-farmers pocket. ...read more.

In the later years of the many Controller-Generals that were employed borrowed more and more money, thinking this was the way they could get back on track, but unfortuantly the debt grew and grew. The coutries became less willing to loan money, until one Contorller-General, named Calonne, borrowed money and spent it on building and such within the counrty in order to attract more investment. This helped cause the financial crisi because France had run out of money, they had no resources that they could tap into, and certainly nothing to repay the hefty intrest. However these were only the long-term causes to the financial crisis, they did not cause the revolution on their own, the short-term problems sparked the rebellion and ultimatly the revolution. Firstly, in 1776 Louis 16th decided he wanted to hire a Controller-general to try and sort out the financial problems within the country, so he employed a man called Jaques Necker. Necker appeared to work wonders at the end of his days he wrote a report on the kings finances, 'Compte Rendu au Roi' which said that the King was not in debt, ...read more.

He could have tried a lit de justice but because of his weak nature he did not want the nobility to revolt against him, so sat back and watched. This did not help the financial problems in the country because those who had all the money did not want to give it back to the country they wanted the 3rd estate consisting of peasants to pay the tax, but the peasants couldn't sustain the country on their tax alone. By the few years preceding the revolution France was in a lot of trouble its monarch was declared bankrupt and there was no money being put back into the country. Not much had been done as regards reforming the system, simply because the wealthy who had the privilege of not paying tax also controlled the country, this meant they had the power to stop reform from being passed. However after the enlightenment the 3rd estate realised they didn't neccessaily have to let the higher estates rule their lives, they also realised that the 1st and 2nd estates only made up 5% of the population, and that they could overthrow them in the revolution that was waiting to happen. ...read more.