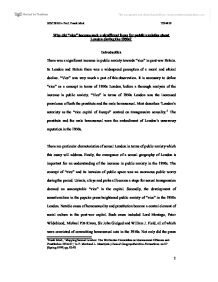 Why was &quot;vice&quot; and sexual scandal a public worry in 1950s London

Why did "vice" become such a significant focus for public anxieties about London during the 1950s? Introduction There was a significant increase in public anxiety towards "vice" in post-war Britain. In London and Britain there was a widespread perception of a moral and ethical decline. "Vice" was very much a part of this observation. It is necessary to define "vice" as a concept in terms of 1950s London, before a thorough analysis of the increase in public anxiety. "Vice" in terms of 1950s London was the increased prevalence of both the prostitute and the male homosexual. Mort describes 'London's notoriety as the "vice capital of Europe" centred on transgressive sexuality.'1 The prostitute and the male homosexual were the embodiment of London's unsavoury reputation in the 1950s. There are particular characteristics of sexual London in terms of public anxiety which this essay will address. Firstly, the emergence of a sexual geography of London is important for an understanding of the increase in public anxiety in the 1950s. The concept of "vice" and its invasion of public space was an enormous public worry during the period. Urinals, alleys and parks all became a stage for sexual transgression deemed an unacceptable "vice" in the capital. Secondly, the development of sensationalism in the popular press heightened public anxiety of "vice" in the 1950s London. Notable cases of homosexuality and prostitution became a central element of social culture in the post-war capital. Such cases included Lord Montagu, Peter Wildeblood, Michael Pitt-Rivers, Sir John Gielgud and William J. Field, all of which were convicted of committing homosexual acts in the 1950s. Not only did the press seek to out sexual scandal; they actively attempted to define the male homosexual, often in a derogatory way which exacerbated public anxiety in London. Finally, it is also important to consider the impact of both the Wolfenden committee and its subsequent report on prostitution and male homosexuality. ...read more.

Homosexuality is an unpleasant subject, but it must be faced if it is ever to be controlled'.10 Cudlipp, The Daily Mirror, and the Sunday Pictorial represented the unsavoury face of public anxiety in the 1950s metropolis. There were however, certain sections of the popular press which condemned the view put forward by Cudlipp and his publications. The Guardian and the Observer took a more progressive view of homosexuality. These newspapers were far more appreciative of academic research which was undertaken in post-war Britain. Chris Waters has highlighted both the development of tabloid sensationalism and scientific definitions of homosexuality; the 1950s witnessed not only the crystallisation of a tabloid discourse of homosexuality but a parallel expansion of an alternative, scientific discourse, one that battled in the marketplace of ideas for both popular and state acceptance.11 Waters' argument is extremely important in considering public anxiety over "vice" in the 1950s. Scientific definitions of homosexuality as well as the tabloid version of "vice" generated much public interest in the 1950s. Medical explanations for homosexuality did become more common during the period; however, they did not immediately eradicate the problem of public anxiety. The press was also responsible for another representation of "vice" which increased public anxiety. Sex scandals dominated tabloid newspapers throughout the 1950s. The tabloids targeted celebrities, politicians, actors and servicemen as a means to sell papers, and there was no better way to do this in 1950s London than an invasion of private sexual spheres. The most notable case in the 1950s was that of Peter Wildeblood, Lord Montagu, Michael Pitt-Rivers and two young RAF servicemen. Wildeblood, Montagu and Pitt-Rivers were all convicted of committing homosexual acts and the trial was extensively covered in the newspapers.12 Patrick Higgins argues that the arrests of the men were purposefully timed to gain maximum coverage; Whoever planned the arrest appreciated that the Sunday papers would provide much more space than the dailies. ...read more.