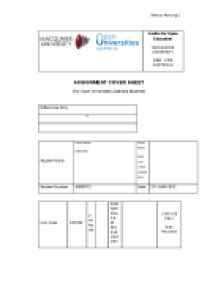 Why was war so fundamental to social and political organisation in ancient Rome? Was it ideology or necessity that drove the ancient worlds to war?

﻿Marcus Hartung Centre for Open Education MACQUARIE UNIVERSITY NSW 2109 AUSTRALIA ASSIGNMENT COVER SHEET (For Open Universities Australia students) Office Use Only ** Student Name Family Name HARTUNG Given Name MARCUS JOHN FREDERICK Student Number 42505712 Date 21st JUNE 2012 Unit Code HST220 Unit Name WAR AND PEACE IN WORLD HISTORY COE USE ONLY Date Received Assignment No. 1 Assignment Title SHORT ESSAY Due Date 22ND JUNE 2012 Contact Info Phone:0409355686 Email:Marcus.hartung@students.mq.edu.au Word Count (If Applicable) 1000 Turnitin No. (If Applicable) N/A ACADEMIC HONESTY DECLARATION (this is very important please read carefully): By placing my name in this document I declare that: 1. This assessment is my own work, based on my personal study and/or research; 2. I have acknowledged all material and sources used in the preparation of this assessment, including any material generated in the course of my employment; 3. If this assessment was based on collaborative preparatory work, as approved by the teachers of the unit, I have not submitted substantially the same final version of any material as another student; 4. Neither the assessment, nor substantial parts of it, have been previously submitted for assessment in this or any other institution; 5. I have not copied in part, or in whole, or otherwise plagiarised the work of other students; 6. ...read more.

At the heart of the Roman Republic was a vigorous aristocracy powered by a social ethos that valued concepts of laus and gloria ? fame and glory, above all others.[1] Such was the power of these two concepts that without them, success in either of the inexorably entwined facets of Roman life was unlikely. Ten years military service was a requirement of political office and individual prowess that furthered Rome?s glorification provided a fast track to a consulship.[2] Affirming this through ancient source evidence is Plutarch?s recording of seven-times consul Gaius Marius? boast that he had ?carried off the consulship/as spoils of war?.[3] War had established itself as the vehicle by which the aristocracy could further their political career, whilst furthering Rome?s frontiers. The nexus is obvious; Rome?s almost permanent war-footing during this period was the consequence of an ideology that required the benefits of battlefield glory to be in perpetual availability.[4] This assertion does not detract from, or negate Rome?s empire building and wealth seeking motivations towards war, as the two were firmly linked and mutually beneficial. The latter however was evident in many ancient societies, but the symbiotic relationship between war and sociopolitical organisation was almost exclusively a Roman phenomenon. It is important when positing war?s influential primacy on social custom and political policy in Republican Rome that a picture of mindless barbaric aggression is not presented. ...read more.

aggression, in later post-Republican years its over extension of frontiers resulted in a fragility that saw it consumed entirely with their defence.[13] Consolidating and protecting frontiers and the pacification of conquered inhabitants tested the thinly stretched Roman military capabilities, and wars initiated years earlier through ideology became now, wars of necessity.[14] Any historical analysis of ancient Rome reveals a fascinating and unique utilitarian preoccupation and relationship with war. Though other ancient societies utilised its methods in gaining power and wealth, it was Rome that integrated it into its sociopolitical structure. The zealous ideology of the Romans embraced war, breathed life into it, fanned its flames, and then basked in its light and warmth. The preceding analysis examined how war carried Rome to an unprecedented hegemonic predominance and the Roman people dutifully wore its essence as confirmation of their identity. Weaving it into the very fabric of their society, war facilitated the Roman machine to a degree unknown in other ancient societies. When assessing the question of whether ideology or necessity drove the ancient worlds to war, the answer is subjective to a particular society for all except Rome. Different societies were motivated for different reasons, but Republican Rome?s predilection for war was a direct result of an ideological determination. This scenario, as mentioned earlier, eventuated ultimately and somewhat ironically, into necessity as its expansion finally peaked and the inevitable contraction began; Rome was in decline. ...read more.