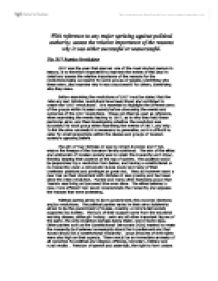 With reference to any major uprising against political authority, assess the relative importance of the reasons why it was either successful or unsuccessful.

With reference to any major uprising against political authority, assess the relative importance of the reasons why it was either successful or unsuccessful. The 1917 Russian Revolutions 1917 was the year that sparked one of the most studied periods in history. It is therefore imperative to examine the events of this year in detail and assess the relative importance of the reasons for the revolutions being successful for some groups of people, identifying who these were, also examine why it was unsuccessful for others, identifying who they were. Before examining the revolutions of 1917 must be stated that the February and October revolutions have been linked and combined to create the '1917 revolutions'. It is essential to highlight the different aims of the groups within Russian society before discussing the events and outcomes of the 1917 revolutions. These can then be used as reference, when examining the events leading to 1917, as to why they held these particular aims, and then investigating whether the revolution was successful for each group when examining the events of 1917, and why. To list the aims concisely it is necessary to generalise, as it is difficult to cater for small proportions within the classes and groups of Russian society's opposing beliefs. The aim of Tsar Nicholas II was to remain in power and if not, ensure the lineage of the Romanov family continued. The aim of the elites and aristocrats of Russian society was to retain the monarchy as it stood, thereby keeping their position at the top of society. This position would be jeopardised by a revolution from below, and having a constitutional or no monarchy under a democratic Russia would put many of their unelected positions and privileges at great risk. They did however want a new Tsar as their discontent with Nicholas II was growing and had been since the 1905 revolution. Marxist and many other historians argue that Tsarism was living on borrowed time ever since. ...read more.

As all excess food was seized from them, the peasants had little incentive to work harder to produce more as the Bolsheviks only left them barely enough to survive on as it was. This also contributed to Russia's food shortages. The February revolution was unsuccessful for the peasants as it allowed a party who did not represent their views into government although the Constituent Assembly election gave a majority of votes and seats to a party who did - the Social Revolutionaries. The peasants had always believed in the Tsar and religion to solve their problems. Although Marxist historians would regard this a false hope others would argue that it was better than the no hope that they had under the Bolsheviks, who exploited them more than the Tsar did. The fact they did not gain 'peace, bread and land' is they key factor in the revolution being unsuccessful as although they gained literacy, free education and amenities for those living near cities, this was not as important to their lives as those three fundamentals. The aims of the elites were not met by the revolutions, however the results were not completely unsuccessful, as they were not affected as negatively as many would assume. Many of the bureaucrats and civil servants of the Tsars were kept on as the Bolsheviks could see the benefit of using people with expertise, and in return they were given the advantages that came with holding high positions in government. Although neither group's views on society matched 'there were advantages for both sides in retaining a working relationship'6. The aristocracy were enemies of the principles of the Bolsheviks. Some fled following the revolutions and the defeat in the civil war, however around '100,000 ... were resident in the countryside ... the amount of land they were allowed to keep ... was often rather generous'7. Although some were imprisoned, killed or exiled, many of the elites remained in Russia with benefits and privileges over the rest of Russian society, although less than pre 1917. ...read more.

Persons who suffer by this property revolution shall be deemed to be entitled to public support only for the period necessary for adaptation to the new conditions of life ... (6)The right to use the land shall be accorded to all citizens of the Russian State (without distinction of s*x) desiring to cultivate it by their own labour, with the help of their families, or in partnership, but only as long as they are able to cultivate it. The employment of hired labour is not permitted. In the event of the temporary physical disability of any member of a village commune for a period of up to two years, the village commune shall be obliged to assist him for this period by collectively cultivating his land until he is able to work. Peasants who, owning to old age or ill health, are permanently disabled and unable to cultivate the land personally, shall lose their rights to the use of it but, in return, shall revive a pension from the State. (7) Land tenure shall be on an equality basis ... There shall be absolutely no restriction on the forms of land tenure-household, farm, communal or co-operative, as shall be decided in each individual village and settlement.' Sourced from, John Daborn, Russia, Revolution and counter-revolution, p106,107 (1991) E 'The peculiarity of the current moment in Russia consist in the transition from the first stage of the Revolution, which gave power the bourgeoisie as a result of insufficient consciousness and organisation of the proletariat, to its second stage which should give the power into the hands of the proletariat. The present parliamentary-bourgeoisie republic restricts in the independent political life of the masses, hinds their direct participation in the democratic upbuilding of the state from the bottom to the top. The Soviet of Workers' and Soldiers' Deputies does just the reverse. What is needed is not a parliamentary republic - a return to that from the Soviet of Worker' Deputies would be a step backwards - but a republic of Soviets throughout the country, growing from below upwards. ...read more.