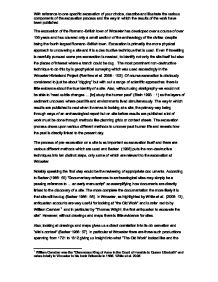 With reference to one specific excavation of your choice, describe and illustrate the various components of the excavation process and the way in which the results of the work have been published.

The excavation of the Romano-British town of Wroxeter has developed over a course of over 100 years and has covered only a small section of the archaeology of the civitas despite being the fourth largest Romano-British town. Excavation is primarily the more physical approach to uncovering a site and it is a destructive technique that is used. Even if trowelling is carefully pursued some pre-excavation is needed, to identify not only the site itself but also the places of interest where a trench could be dug. The most prominent non-destructive technique to do this by is geophysical surveying which was used exceedingly in the Wroxeter Hinterland Project (Renfrew et al. 2008: 102). Of course excavation is obviously considered to just be about "digging" but without a range of scientific approaches there is little evidence about the true identity of a site. Also, without using stratigraphy we would not be able to "read subtle changes ... [to] study the human past" (Stein 1993: 1) as the layers of sediment uncovers where past life and environments lived simultaneously. The way in which results are published is vast when it comes to looking at a site, the primary way being through ways of an archaeological report but on site before results are published a lot of work must be done through methods like planning grids or context sheets. The excavation process draws upon various different methods to uncover past human life and reveals how the past is directly linked to the present day. ...read more.

Excavating a site consists of many different elements which work in correlation to each other to uncover the true identity of the site. Generally on site various different factors must be taken into consideration. On every site it is split up into 5m by 5m grids according to the national grid system. The type of excavation matters greatly, is it a rescue or a research excavation. This matters greatly as in rescue excavations a trench is usually "machine-dug" (Barker 1986: 69) or if time is not pressured then a half moon and shovel may be used to remove the grass and a little of the top soil. According to Barker (1986: 89) an archaeological site "should be dissected logically from the surface down, ... layer by layer, feature by feature, down to the smallest feature and ... beyond". A site is usually systematically dug, one centimetre at a time and you are told where you shouldn't tread and to do this there are three separate methods that can be implemented so that the archaeology is not damaged in any way (Collis, 2001: 49). Whilst digging you use a trowel to define the features you find and a brush to collect the soil (or sediment) in the bucket which generalises the features as well. If a large stone is found this must be left in the ground to make sure contexts do not get mixed up. ...read more.