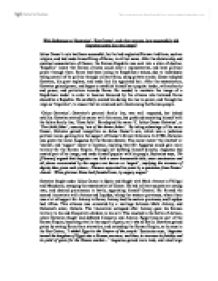 With Reference to 'Suetonius', 'Res Gestae', and other sources, how successfully did Augustus create his own image?

With Reference to 'Suetonius', 'Res Gestae', and other sources, how successfully did Augustus create his own image? Julius Caesar's rule had been successful, but he had neglected Roman traditions, such as religion, and had made himself king of Rome, in all but name. After the dictatorship and eventual assassination of Caesar, the Roman Republic was sent into a state of decline. 'Republic' meant that Roman citizens could elect a representative, and have political power through them. Rome had been losing its Republican values, due to individuals taking control of its politics through military force, using private armies. Caesar adopted Octavian, his great nephew, and made him his appointed heir. After the assassination, Octavian gained power, and began to establish himself as a popular leader, with authority and power, and patriotism towards Rome. He needed to maintain the image of a Republican leader in order to become favoured by the citizens who believed Rome should be a Republic. He carefully created his during his rise to power, and through his reign as 'Imperator', to ensure that he remained well-liked among the Roman people. 'Gaius Octavius'; Octavian's paternal family line, was well respected, but lacked nobility. Octavian started his career with this name, but preferred asociating himself with the Julian family line, 'Gens Julia'. He adopted the name 'C. Julius Caesar Octavius', or 'Divi Julili filius', meaning 'son of the divine Julius'. By taking advantage of the name Caesar, Octavian gained recognition as Julius Caesar's son, which was a judicious political move, gaining him the support of Caesar's former followers. ...read more.

During Augustus' reign, the gates were closed three times; 'It was the will of our ancestors that the gateway of Janus Quirinus should be shut when victories had secured peace by land and sea throughout the whole empire of the Roman people...tradition records that it was shut only twice, but I was the leading citizen the senate resolved hat it should be shut on three occasions.' He was seen favourably, as people viewed him as a peace-loving emperor. The Altar of Peace, or the Ara Pacis, was consecrated in 13 BC, by Augustus to celebrate his victories in Spain and Gaul, and as a reminder to people that he had brought peace. Augustus also extended Rome's territories; 'I recovered all the provinces beyond the Adriatic sea towards the east, together with...I had previously recovered Sicily and Sardinia...I founded colonies of soldiers in Africa, Sicily, Macedonia, both Spanish provinces...' He extinguished the civil wars, again enhancing his image; 'In my sixth and seventh consulships, after I had extinguished civil wars...' Suetonius says: 'He fought five civil wars in all; associated respectively with the names of Mutina, Philippi, Perusia, Sicily, and Actium.' Augustus was seen as capable of controlling foreign lands. His military achievements promoted the idea that peace could be achieved only through Augustus' military power, therefore justifying the wars. Rome's greatest writers, Virgil, Ovid, Horace and Livy were used by Augustus to write promotional material for him. Virgil's Aeneid praised Augustus' regime, implying that it was necessary to fight to expand Rome, and create peace within it. ...read more.

Sending her away showed people that he obeyed the rules as well. Suetonius says; "He even considered her execution...He kept Julia for five years on an island prison..." Marriage was important in the Roman world, for the creation of children, and so by promoting them, Augustus was seen to be caring for his people. He was given the title 'Pater Patriae', which meant he was head of the 'household' of Rome, and promoted him in a fatherly light. Suetonius says that Augustus said 'I have achieved my highest ambition' when he received this honour. Of all his titles, this one helped his image the most, as it showed he was caring for all he ruled. Suetonius also tells us that, throughout his life, Augustus had several affairs and was an extensive gambler; something which Augustus does not mention for the sake of his image. Augustus cleverly used propaganda and military strength to enhance and maintain his image throughout his time in power. He appeared to be a leader who gained all his titles as honours from the Senate; however, he was actually carefully controlling all that happened, so that it was all in his favour. He was seen to be upholding the traditions of Rome, and was thought to be a Republican leader. However, he was not the leader of a Republic, as he in sole command of everything, not allowing others to have any power, for fear they might challenge him. It is arguable that the only reason he was in power for so long, was because of the careful construction of his image; if he had allowed any scandals to surface, or had not 'pulled so many strings', he would never have retained his power. ...read more.