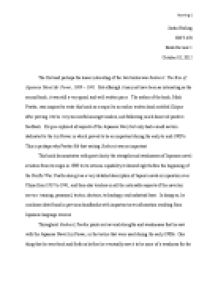 ﻿Norling Justin Norling HIST 470 Book Review 1 October 10, 2012 The first and perhaps the lesser interesting of the two books was Sunburst: The Rise of Japanese Naval Air Power, 1909 ? 1941. But although it may not have been as interesting as the second book, it was still a very good, and well written piece. The author of the book, Mark Peattie, was inspired to write this book as a sequel to an earlier written book entitled Kaigun after proving it to be very successful amongst readers, and following much deserved positive feedback. Kaigun explored all aspects of the Japanese Navy but only had a small section dedicated to the Air Power in which proved to be so important during the early to mid-1900?s. This is perhaps why Peattie felt that writing Sunburst was so important. This book demonstrates with great clarity the strengths and weaknesses of Japanese naval aviation from its origin in 1909 to its extreme capability it showed right before the beginning of the Pacific War. Peattie also gives a very detailed description of Japan's naval air operation over China from 1937 to 1941, and then also touches on all the noticeable aspects of the naval air service: training, personnel, tactics, doctrine, technology, and industrial base. ...read more.

Following WW1, the Germans started to conduct very detailed reviews of how commanders should conduct wars after seeing both the good and bad things that had occurred during the previous battles. Citino does an excellent job of showing us how the Germans start treating soldiers and equipment almost like a science. He also argues that German battlefield success was not the result of any particular new tactical method, technology or weapon but of ?institutional excellence that came about through continued effort for a period of decades.? And although Citino has very convincing arguments to support his claims, this is merely his opinion, and isn?t something that is necessarily true, especially considering some of the new developments the Germans had during these times that separated or at least escalated them much higher than most other nations; examples include developments and creations of many new gases, and then also great German advancements can be seen with many forms of war transportation such as tanks, aircrafts, and submarines. Weimar Germany can and may always be looked at as a time when the nation produced some of the greatest thinkers, gave the world some of the most useful and popular inventions, and made some of the greatest advancements in technology: It is extremely difficult to even entertain the idea that the military did not get involved in some of these great ...read more.

While both the German and the Japanese strategies have many similarities and differences, the differences seam to completely outweigh any of the things that the two may have in common. Perhaps the main thing is that the Japanese air power was not nearly advanced enough to even put up a fighting chance to win any significant sized war, and during the same time, the German Army looked like they should have never been able to be beat during any battle. Peattie showed us that the Japanese lacked crucial military experience, terrible organization and leadership skills, had very little supplies and did a terrible job with building reliable aircrafts, but almost the exact opposite can be seen in The Path to Blitzkrieg. Citini illustrates how Germany possessed one of the greatest military organizations in the entire world during the time. They were capable of defeating nearly any opponent because of the creative strategies used, mass number of military participants, and great advancements in technology and weapons. It was obvious from the readings that the Japanese as well as the Germans both had different doctrines and strategies that they implemented for obvious reasons, and their militaries had many strengths and weaknesses that were very clearly illustrated by the two authors, but in the end it wouldn?t matter, because neither would ever prove to be good enough to defeat the United States and other similar military powers. ...read more.