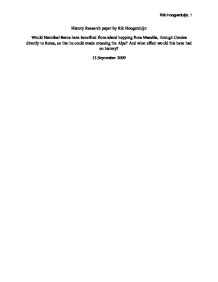 Would Hannibal Barca have benefited from island hopping from Massilia, through Corsica directly to Rome, so that he could evade crossing the Alps? And what effect would this have had on history?

History Research paper by Rik Hoogerduijn Would Hannibal Barca have benefited from island hopping from Massilia, through Corsica directly to Rome, so that he could evade crossing the Alps? And what effect would this have had on history? 13 September 2009 Hannibal Barca has been regarded as a "gifted strategist' by men like Napoleon Bonaparte and the Duke of Wellington."1To be called a gifted strategist by men like Napoleon Bonaparte a person must have undertaken one of the greatest strategic feats in history. Hannibal Barca earned this appreciation by marching his army consisting of infantry and cavalry of racial diversity and 37 war elephants over the Pyrenees and the Alps so that he could launch an attack on the Republic of Rome. But this was at a large cost; Hannibal lost almost half of his infantry, a quarter of his cavalry and almost all his war elephants.2 Hannibal would have benefited from evading the Alps because he would have lost a lot less men, but he would have still gotten his re-enforcements form Hispania and a direct route to Rome. Hannibal Barca was born in Carthage as the son of Hamlicar Barca. Hamlicar Barca had lost the first Punic war against Rome, and when he decided to conquer Hispania (Spain) it is said that Hanibal swore to his father that "so soon as age permit... ...read more.

This time Hannibal fled to Crete where he offered his services to Prusais. Hannibal won a great battle for Prusais however Rome found out that Hannibal had led the Cretan army and demanded that he be taken to Rome. Hannibal who had no way of escaping a third time poisoned himself and died in 183 B.C.6 Hannibal lost a lot of men crossing the Alps. While crossing the Alps, Hannibal and his army faced vicious tribes and hunger. However defeating the tribes was not Hannibal's main concern. Almost all of Hannibal's men that fell while crossing the Alps starved to death. At one point one of Hannibal's officers even proposed to turn to cannibalism.7Although Hannibal made it through the Alps and defeated the Romans, he could not defeat the city of Rome. What if Hannibal had not crossed the Alps but had island hopped trough Corsica and besieged Rome. After the first Punic war Carthage had lost almost its entire war fleet.8 However, Hannibal besieged the city of Saguntum for 8 months, this would have given Carthage enough time to make a large enough navy to transport his men over the Mediterranean. Hannibal would have avoided the loss of thousands of men if he had not crossed the Alps. If Hannibal had chosen to wait for the Carthaginian fleet he could have transported his army across the northern Mediterranean strait to Rome. ...read more.