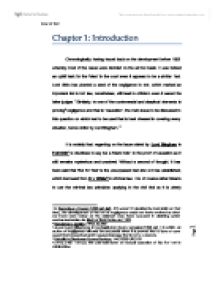 In the generality of personal injury actions, it is of course true that the claimant is required to discharge the burden of showing that the breach of which he complains caused the damage for which he claims and to do so by showing that but for br

Chapter 1: Introduction Chronologically, having traced back on the development before 1932 whereby most of the cases were decided on the ad hoc basis. It was indeed an uphill task for the 'triers' in the court even it appears to be a similar fact. Lord Atkin has planted a seed of the negligence in tort, which marked an important ink in tort law, nonetheless, still lead to criticism even it eased the latter judges.1 Similarly, to one of the controversial and skeptical elements in proving2 negligence and that is 'causation', the main issue to be discussed in this question on which test to be used that is best dressed in covering every situation, hence obiter by Lord Bingham.3 It is notably that, regarding on the issue stated by Lord Bingham in Fairchild4 is doubtless to say but a 'black hole' in the proof of causation as it still remains mysterious and unsolved. Without a second of thought, it has been said that 'But for Test' is the unsurpassed test since it has established, which borrowed from R v White5 in criminal law. It is of course rather bizarre to use the criminal law principles applying in the civil trial as it is utterly contradicting to the aim of tort via the maxim of damno sine injuria6 since it would be harder to prove every single injury beyond reasonable doubt. Hence, unquestionably, a lower standard will be granted in a civil case that is, on the balance of probabilities. So do it leads to how the 'causation' element has been vague, especially with the modified test in Fairchild case. Therefore, His Lordship Statement has raised a momentous point where in general situation, 'But For'7 Test may be used if it appears to be apparent that it is more than probable that a 'sole' cause is present. A complication, however, arises when it appears to the fact that, it is thorny to identify the sole cause as what took place in Fairchild case. ...read more.

The House of Lord in this case, has set in favour of the claimant by held that, the defendant was not liable for injury that is resulted from the exposure to dust in the proceed of work, but it had merely materially increased the risk. There has been a suspicion view where, the reason of the court to lower the standard is plainly for a question of policy. In regards with that, Lord Wilberforce has bluntly expressed in the judgment that: "If one asks which of the parties, the workman or the employers, should suffer from this inherent evidential difficulty, the answer as a matter of policy or justice should be that it is the creator of the risk who, ex hypothesi, must be taken to have foreseen the possibility of damage, who should bear its consequences."18 In contrary to the aforementioned standing decision, in Wilsher v Essex Area Health Authority which is also decided by the House of Lord, has taken a different view. It is identified that, the claimant was born prematurely hence needed more oxygen to survive. Unfortunately, the junior doctor happened to be negligent and inserted a catherer into a vein rather than an artery. As a consequence, the baby (claimant) had received excessive oxygen, which eventually led to damage to the retina and consequential blindness. Apparently, the baby has suffered a great material physical injury.19 In the Court of Appeal of McGhee case, where Lord Browne Wilkinson being the minority view has delivered his dissenting view was later found preferred by Lord Bridge of Harwich in this case that: "I do not consider that the present case falls within their [McGhee's majority decision] reasoning. A failure to take preventive measures against one out of five possible causes is o evidence as to which of those five caused the injury." The mentioned quotation is then used as a ratio in deciding Wisher's situation. ...read more.

Doubtless, one test which backed the principle is 'But For Test' used in Barnett's case. It is suggested that, perhaps the principle of causation will be less burdened to make 'Fairchild' and 'Barker' principle into a new category of law.27 Stringently speaking, the fact of the said case does not even fit in the law of negligence as there is a failure of proof on the balance of probabilities. As per academician T.Hill: "...Proof of causation should not be accepted on anything less than the balance of probabilities, as in common with all civil actions..."28 Notwithstanding that Compensation Act 2006 may have helped in a way to compensating the parties still it is far from the aim to ensure justice. So, commentator29 is of the view to establish a new tort after the novel case of Sienkiewicz v Grief (UK) Ltd [2009] as The 'Tort of Increase Risk in Personal Injury' with the threshold that, only similar fact like Fairchild with obstacles to prove under medical evidence and multiple possible defendants. The establishment of Fairchild principle perhaps purely on a pragmatic purpose that time, and maybe it is the time for some reform to make it sensible and justice sounded. So far, It appears that Lord Bingham is quite true as to in general scenario when dealing with personal injury cases, 'But For' Test is the finest test to be invoked simply because it put more weight on the standard of proof in the balance of probabilities. It may, however, sound sheepish as after all the assessment on which test dress the best in 'causation', the result don't seem to answer nor to give us a clearer impression on how it is better worked. Nonetheless, it is of the opinion that, law should reform the lawin accordance from time to time as the social needs differ since time immemorial until now. Hence, perhaps the idea of having a new tort is of a fruitful one. Even if it does not, maybe modifying causation is not the only route but to have a better test in 'remoteness'30. ...read more.