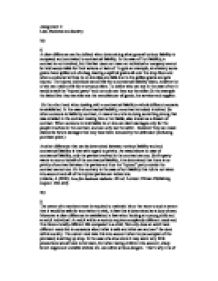 A clear difference can be defined when determining what general tortious liability is compared and contrasted to contractual liability.

Assignment 2 Law, Business and Society 1a) i) A clear difference can be defined when determining what general tortious liability is compared and contrasted to contractual liability. In the case of Tort liability; a contract is not involved, but this fact does not mean an individual or company cannot be held accountable for their actions or lack of. To give an example, at a bakery some grains have spilled out of a bag, leaving a spill of grains all over the shop floor and when a customer arrives he or she slips and falls due to the spilled grains and gets injured. The injured individual cannot file for a contractual liability claim, however he or she can make a file for a tortuous claim. To define who can sue in the case of tort it would entail the "injured party" and not only can they sue the seller (In the example the baker) but they can also sue the manufacturer of goods, the servicer and supplier. On the other hand when dealing with a contractual liability a whole different scenario is established. In the case of contractual liability, a contract is indeed involved. So when someone is liable by contract, it means he or she is doing something wrong that was entailed in the contract making him or her liable, also known as a breach of contract. When someone is held liable he or she can claim damages only for the people involved in the contract, and can only sue the seller. However they can make claims for future damages that may have been induced by the defendant (including purchase price.) Another difference that can be determined between tortious liability and and contractual liability is that with regard to privity. As stated above in case of contractual liability, only the parties involved in the contract can sue. So if a party wants to sue on behalf of the contractual liability, it is determined that there is no privity of contract between the parties and thus the "injured" party outside the contract cannot sue. ...read more.

outside the shield afforded by the corrugated iron, and a piece of molten metal struck him on the lower lip, causing a burn. The burn was the promoting agent of cancer, which developed at the site of the burn, and from which he died some three years later. The cancer developed in tissues which already had a pre-malignant condition. But for the burn, cancer might never have developed, although there was a strong likelihood that it would have done so at some stage in his life." (www.a-level-law.com/caselibrary/SMITH%2520v%2520LEECH%2520BRAIN) The main issue is this case is to what extent is the molten metal splatter the cause of the cancer and his ultimate death. The splatter came onto his lip due to insufficient protection and thus there was a lack of care. What can then be concluded is that the burn on his lip was due to negligence, however his lip was already in a pre-cancerous condition. Now the question arises if the splatter was the drip that made the bucket spill, or was Mr. Smith already at his end. What can clearly be applied here is the egg shell rule, which "is a legal doctrine that states that the wrongdoer takes the victim in the condition that he or she finds him There is no allowance for an already weakened state of the injured party. If a defendant negligently injures someone, the defendant is responsible for all the consequences, whether they were foreseeable or not." (http://definitions.uslegal.com/e/eggshell-skull/) What can be concluded that even though Mr. Smith was in a weakend state, Leech Brain& CO Ltd. Is still liable for the damage caused by the metal splatter that hit Mr. Smith. Even though Leech Brain&Co Ltd. may not have anticipated that the splatter would result in cancer, they are still held liable for the splatter that hit Mr. Smith as well as the cancer that occurred later on. ...read more.

As stated above trademarks are used as a marketing strategy to enable providers of goods or services that their products are immediately clearly recognized by their potential customers. In 1994 the original act of 1938 was expanded by the Trade Marks act, this act implements an EC Directive aimed at harmonizing trademark laws throughout the EU. In this expansion the Trademark law went beyond signs and logos, making it possible to trade mark packaging, letters and numerals down to jingles that are accompanied with your brand. The expansion of this act has made trademarks "safer" throughout the EU, making it less easy to just copy some ones brand. In my opinion the harmonization was a big leap forward, however further steps definitely have to be undertaken. To this date trademark is still being done on a large scale, especially within Asian countries brand logos (such as Louis Vuitton) are copied without issues and sold without any issues within the country, and then brought back to the west. Especially considering the rapid development of Asia, I think it is crucial to further expand the trademark laws internationally to secure brand uniqueness. (Adams, A (2010). Law for business students. 6th ed. London: Pitman Publishing imprint. 514-516) ii) Names of people can be trademarked under the condition that they are represented in some way that makes them distinctive and immediately recognizable. To achieve this the name can be done as a unique signature (like Walt Disney) or by unique lettering. However companies may prefer to work under made up names to ensure company distinction. So as a new entrepreneur I would be able to register my name as a trademark, if by doing so I would make the logo unique enough. (Adams, A (2010). Law for business students. 6th ed. London: Pitman Publishing imprint. 513) Reference: Adams, A (2010). Law for business students. 6th ed. London: Pitman Publishing imprint. http://www.duhaime.org/LegalDictionary/O/OccupiersLiability.aspx Per Alderson B., Blyth v Birmingham Waterworks Co 1856 http://legal-dictionary.thefreedictionary.com/duty+of+care http://www.infolizer.com/1a-l5ev5el-l1a9na13com/Barnett-v-chelsea-and-kensington-hospital-management-committee-.html www.a-level-law.com/caselibrary/SMITH%2520v%2520LEECH%2520BRAIN http://definitions.uslegal.com/e/eggshell-skull/ http://profmadams.blogspot.com/2010/02/favourite-case-salomon-v-salomon-ltd.html http://business-law.freeadvice.com/franchise_law/agreement_franchise.htm http://www.businesslink.gov.uk/bdotg/action/detail?itemId=1073791408&type=RESOURCES ...read more.