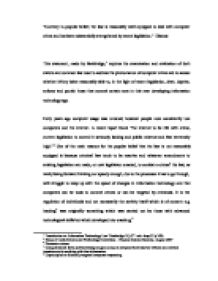 Contrary to popular belief, the law is reasonably well equipped to deal with computer crime and has been substantially strengthened by recent legislation. Discuss

"Contrary to popular belief, the law is reasonably well equipped to deal with computer crime and has been substantially strengthened by recent legislation." Discuss This statement, made by Bainbridge,1 requires the examination and evaluation of both statute and common law used to address the phenomenon of computer crime and to access whether it/they is/are reasonably able to, in the light of recent legislation, deter, deprive, enforce and punish those that commit certain acts in this ever developing information technology age. Forty years ago computer usage was unusual; however people now consistently use computers and the internet. A recent report found "the internet to be rife with crime, current legislation to control it seriously lacking and public mistrust and fear extremely high."2 One of the main reasons for the popular belief that the law is not reasonably equipped is because criminal law tends to be reactive and whatever amendments to existing legislation are made, or new legislation enacted, to combat e-crimes3 the law, as rarely being forward thinking nor speedy enough, due to the processes it has to go through, will struggle to keep up with the speed of changes in information technology and that computers can be tools to commit crimes or can be targeted by criminals. It is the regulation of individuals and not necessarily the activity itself which is of concern e.g. hacking4 was originally something which was carried out by those with advanced technological skills but which developed into cracking.5 Paul Wright,6 who counts himself among those who feel computer crime cannot be sufficiently dealt with under current legislation, stated recently that computer crime is "...perceived to suffer from an increased tendency to 'legislative dependence... digital crime develops and changes very rapidly and it takes years for legislation to be enacted, by which time the crime and criminal will have developed a different form of modus operandi." 7 A computer is not defined in statute.8 However, Lord Hoffman defined it as "a device for storing, processing9 and retrieving information."10 Additionally ...read more.

The speed at which technology evolves and the process and speed at which legislation is implemented means that any law is only adequate at that particular time it is drafted. The recent case of McKinnon v USA158 for offences under s2 CMA committed from the UK but target and damage caused in USA shows that it may be better to be tried under one country's laws than those of another. Many people, as a result of computer technological advances, now bank on-line and buy goods and services over the internet from others who may be based here in the UK or overseas. Cyber frauds are developing from the familiar fraudulent use of credit cards, as the cards themselves need not be used,159 to raiding these e-bank accounts. There are already critics who are concerned that anyone who makes software tools, which could be used for legitimate as well as illegal hacking, could be criminalised as legislative provisions do not make any difference for the reasons for their use. However, s3A CMA160 will require enforcement agencies and the judiciary to ascertain whether any offences161 have been satisfied as articles can be quite legally made, supplied etc before convicting. Paul Mobbs162 stated: "...it is difficult to clamp down on computer-based crime by legislating against certain types of activity without affecting others...many innocent people could be covered as part of efforts to control a very small minority of 'Net users." 163 Furthermore, consideration has not been given, in any new UK legislation, to some cyber issues such as spamming.164 Between 2001 and 2006 there were only 89 convictions under the CMA. The amendments made to the CMA and the introduction of the PJA should go some way to convict those committing DoS165 and DDoS attacks and the stiffer penalties may help to deter, as viruses can be both costly in terms of finance and disruption.166 The Solicitor-General stated that there were over 36,000 prosecutions under the FA since its introduction167 and it would appear that the Act ...read more.