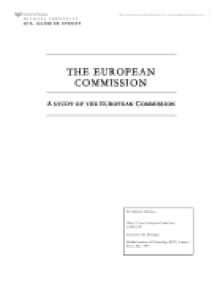 A study of the European Commission

MICHAEL ARRHENIUS DIT, AUNGIER STREET THE EUROPEAN COMMISSION A STUDY OF THE EUROPEAN COMMISSION INTRODUCTION When examining the European Union it is very easy to look at the European Commission as the central character of the EU's policy-making process. Without it's 20 Commissioners and the 15.000 staff members that serve it, the European Union would not work. In short, the Council and the European Parliament need a proposal from the commission before they can pass a legislation. Also EU laws are mainly upheld by Commission actions, the integrity of the single market is maintained through Commission policing as well as research & technological development programs managed by the Commission. The Commission is based in Brussels (200 rue de la Loi) and the Commissioners meet once a week to conduct their business. If necessary though, the Commission may hold special sessions in addition to it's weekly meeting. Routine matters are dealt with in simplified written procedures, which speeds up the process within the Commission. The powers and directives of the Commission are covered by articles 155-163 in the treaty. COMPOSITION It is the 20 Commissioners (members of Commission) who provide the political leadership and direction for the organization. ...read more.

It also never takes any decision on European Union policies. Decisions in the Commission are made by a majority vote and when adopted by the majority, the Commissioners are expected to give full support to the policy. When drafting a proposal, the Commission has three major objectives to follow; the European interest (what is best for the Citizens and the Union as a whole, rather than sectorial interests or individual countries), to consult as widely as necessary (this means listen to governments, industries, trade unions and technical experts before completing a final draft of the proposal) and to respect the principle of subsidiarity (ensure that the European Union takes action only when it will be more effective than if left to individual Member States). After a formal proposal has been sent for legislation to the Council and the Parliament, the EU's law-making process is heavily dependent on the effective cooperation between these three institutions (see chart on next page). First a formulation of the proposal is made in the Commission. A working group within the Commission is then established, which only has advisory powers though. The group's work is then sent back to the Commission (2) ...read more.

Since the Commissioners only can be elected 2 times (total of 10 years), it is a fact that a commissioner on his 2nd and last term, in a larger extent, can be target for bribery or even blackmail. They know they can't get elected again and that they have 5 years before it's all over. We have seen proof of such things already within the Commission and therefor it is a point that should be looked on very closely. The last issue is mainly a reflection of the age of the Commissioners. A quick count showed that the average age for the present Commissioners is 52 years (52.35). With ages up to even 66 years and the youngest person being only 40 years clearly states that the organization suffer somewhat from an age problem. The difference becomes even more clear if you divide it up among male and female (average age for women Commissioners is 46 years while the average age for men is 54.5 years). It's hard though to suggest that the European Union try to lower the average age in the Commission because of the political experience needed to be a good Commissioner. But with the growing interest among young people to become more involved in the Community, this will influence the institutions and in the long rung even out the age differences. ...read more.