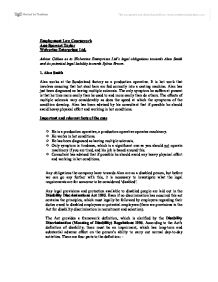 Advise Gillian as to Wolverine Enterprises Ltd&amp;#146;s legal obligations towards Alan Smith and its potential legal liability towards Sylvia Brown.

Employment Law Coursework Ann-Spowart Taylor Wolverine Enterprises Ltd. Advise Gillian as to Wolverine Enterprises Ltd's legal obligations towards Alan Smith and its potential legal liability towards Sylvia Brown. 1. Alan Smith Alan works at the Sunderland factory as a production operative. It is hot work that involves ensuring that hot steel bars are fed correctly into a casting machine. Alan has just been diagnosed as having multiple sclerosis. The only symptom he suffers at present is that he tires more easily than he used to and more easily than do others. The effects of multiple sclerosis vary considerably as does the speed at which the symptoms of the condition develop. Alan has been advised by his consultant that if possible he should avoid heavy physical effort and working in hot conditions. Important and relevant facts of the case => He is a production operative, a production operative operates machinery. => He works in hot conditions. => He has been diagnosed as having multiple sclerosis. => Only symptom is tiredness, which is a significant one as you should not operate machinery if you are tired, and his job is based around this. ...read more.

This is contained in section 6(6) of the Act. How much should an employer spend on adjustments? Section 6(4) lists factors to be considered in assessing reasonableness; - => The efficacy of the adjustment => Its practicability for the employer => The cost to the employer => How disruptive it would be The Code of Practice suggests as one rule of thumb that it would be reasonable to expect an employer to spend at least as much as it would cost to recruit and train a replacement for the job.2 An example of an employer's failure to comply with the Act is demonstrated in a case whereby the employer refused the employee recovering from ME to work at home.3 Gillian should in the meeting discuss making suitable adjustments to Alan's working conditions and or working times, perhaps a fan in his work area to prevent him from having to work in hot conditions and more rest periods to help with the tiredness he currently suffers. If provisions were not made for Alan, a breach in the employer's duties would have occurred and he could claim for disability discrimination, as he would have been treated less favourably than a non-disabled employee. ...read more.

There must be an absence of bias. The decision (reached after adjournment) The employer must take account of : 1. Employee's disciplinary record 2. Employee's general record, age, position, length of service. 3. If the disciplinary procedure indicates the likely penalty. 4. the penalty imposed in similar, past cases. 5. special circumstances (e.g. health or domestic problems) 6. The gravity of the offence. In this case the employer seems to have been ignorant to the rather substantial domestic problems of the employee in question. Things like general record, length of service and all these types of things have also been overlooked. She could claim for unfair dismissal. The employer claimed that by not re-instating her he was trying to maintain discipline, when he wasn't following the correct procedure in the first instance by not properly considering the circumstances. There is potential legal liability. Remedies would be re-instatement or a compensatory award. 1 Employment Law article by Ann-Spowart Taylor and Stephanie Proud. 2 Pitt, Employment Law. 3 Hillingdon LBC v Morgan [1999] 4 Waltons and Morse v Dorrington [1997] IRLR 488 5 As identified by the ACAS Code of Practice, no 1 on Disciplinary and Grievance Procedures (2000). 6 Employment Rights Act 1996 s.98 7 Devis v Atkins [1997] IRLR 314 8 Pitt, Employment law. ?? ?? ?? ?? ...read more.