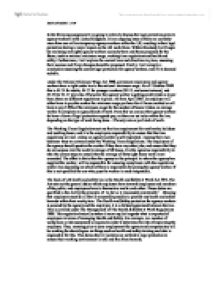 In the following assignment I am going to critically discuss the legal protection given to agency workers in the United Kingdom. It is an ongoing issue as there are currently more than one million temporary agency workers within the UK, resulting in their legal protection having a major impact on the UK work force. Within this study I will begin by analysing any rights agency workers currently have and those proposed for the future, such as national minimum wage, working time regulations and health and safety. Furthermore, I will explore the current laws and directives in place, assessing their success and if any changes should be proposed. Finally, I will compile a conclusion assessing the current legal protection for agency workers, and if it is deemed suitable. Under the National Minimum Wage Act 1998, permanent employees and agency workers have a right under law to the national minimum wage. As of 1 October 2008 this is �5.73 for adults, �4.77 for younger workers (18-21, and some trainees), and �3.53 for 16-17 year olds. If however the agency worker is getting paid by task as to per hour, there are different regulations in place. As from April 2005, an employer will either have to pay the worker the minimum wage per hour for all hours worked or will have to pay 120% of the minimum wage for the number of hours it takes an average worker to complete an agreed block of work. ...read more.

This legislation sets minimum standards of conduct and is designed to protect the interests of workers, wither permanent or temporary agency workers. Inspectors within the Employment Standards Agency have the right to enter premises which are used for employment agency purposes and examine documents and records to check they are at standard of the Employment Agencies Act 1973 and Regulations. If necessary they can prosecute employment agencies for breach of the legislation and take it to an Employment Tribunal, encouraging the company to be prevented from working or carrying on work as an employment agency. Additionally to this agency, workers are protected by the Conduct of Employment Agencies and Employment Businesses Regulations 2003. These regulations stop them, for example, from charging workers fees for finding jobs. They must also ensure a worker has any qualifications legally required to do the work. This means that agency is ensuring you have the required qualification and skills for the job in which you are taking part. In conclusion we can see that there are a number of ways agency workers within the UK are protected. Regulations, laws and directives give them protection in working times, wages, health and safety, holidays and anti-discrimination. Although there are a number of protections provided to agency workers, on the other hand there is the more less protected elements, such as redundancy and unfair dismissal. It is the rare case that will be successful. The new directive that is currently getting passed by parliament will provide agency workers with more substantial rights within their employment, although the agencies themselves are impartial on the new directive coming into force. ...read more.