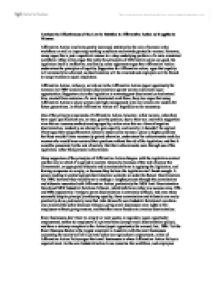 Analyse the Effectiveness of the Law in Relation to Affirmative Action as it applies to Women. Affirmative Action laws have greatly increased, statistically, the role of women in the workforce as well as improving working conditions and awards granted to women. However, many argue this is just a superficial answer to a deep underlying problem of a male orientated workforce. Other critics argue that while the principles of Affirmative action are good, the legislation itself is ineffective, and finally, some opponents argue that Affirmative Action undermines the principles of equality. Supporters for Affirmative action, ague that equality will eventually be achieved, as discrimination will be removed and employers will be forced to accept women as equal employees. ...read more.

They argue that using affirmative action to assure some women a place in higher positions that they wouldn't have necessarily gained otherwise, undermines the achievements made by women who would have received their positions without the aid of the legislation, and that it would be presumed, by the rest of society, that their achievements were through use of the legislation, rather than personal achievement. Many supporters of the principles of Affirmative Action disagree with the legislation created and the way in which it's applied to society. Generally, because of the lack of power the Government, or appropriate tribunals and commissions have in applying the legislation, and forcing companies to comply, or because they believe the legislation isn't harsh enough. ...read more.

Act, 1986. Yet the Small Business Sector is the largest employer in Australia with the small businesses accounting for nearly half of all private sector non-agricultural employment, critics of Affirmative Action Policy argue that small businesses is where Affirmative Action Policy is required most. As the new Industrialisation Laws casualise the workforce, and employers have more rights in regard to firing employees, Affirmative Action, and anti-discrimination laws fail to cover this key area. Affirmative Action Legislation is proving to be successful through statistical results, which now show women achieving higher positions truly it truly reverses discrimination, or is still limited by such things as the glass ceiling effect. In recent times it has been proven that while women are gaining more senior positions, they are still the minority, and therefore Affirmative Action Law needs more time in practice before it achieves all of its aims. ...read more.