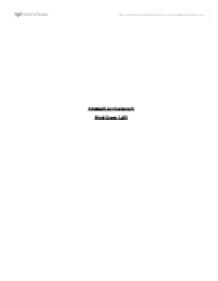 Criminal Law Coursework Word Count: 1,692 In Criminal Law, the principle of art and part liability is a form of derivative criminal liability. Consider and explain how criminal liability might be established on an art and part basis. In addition, consider how an individual may be held liable for the unintended consequences of a course of criminal conduct, and how such an individual might defend any such allegations. Art and part liability is a form of derivative criminal liability meaning: "where two or more people engage together in committing a crime, each actor is equally guilty of the whole crime irrespective of the particular role played by each individual".1 A typical example of art and part liability is a bank robbery. For example, a gang perform the physical act of the crime: the actus reus; the robbing of the bank, with one man sitting in the getaway car. All men are guilty of the crime. If one member inside the bank panics and kills someone, the getaway driver is as guilty of murder as the killer and all the gang members involved. There are, however, defences available to reduce the extent of criminal liability, for example, if the accused was unaware that the killer had a weapon and made no prior agreement or planning for the carrying or use of the weapon, then he would not be responsible for the murder, there would be no art and part liability for this charge if he did not commit the crime. ...read more.

In Scotland there are three ways in which one may be "art and part" of a crime: (1) by counsel or instigation; (2) by supplying materials for the commission of the crime and (3) by assisting at the time of the actual commission of the crime. In cases of agreement, guilt exists because of that agreement.3 An individual could be held liable for the unintended consequences of a course of criminal conduct if the conduct goes unforeseeably outwith the common plan or purpose. In H.M Advocate v Welsh and McLachlan4, two men were alleged to have broken into a house where one of them (it was not known which) had killed the owner. There was no evidence of a common plan between the accused to use violence, and the violence was both sudden and unexpected. Lord Young charged the jury that each accused could only be held culpable for his own actions, and since it was not known who had killed the victim, both accused were acquitted of homicide. He made the significant point that an unexpected attack need not be foreseeable to anyone other than the actual assailant. Thus, if the reason for the killing in the bank robbery example had been that the assistant was having an affair with the killer's wife, the homicide would then be unrelated to the planned crime and there would be no art and part guilt for the death. ...read more.

W had his appeal allowed and conviction of assault substituted for murder art and part. The essential authority in this case is the question posed by Lord Justice-Clerk Wheatley: Did the accused know, or should he have known, that the use of a weapon was involved in the planned crime? Was it within the scope of the common purpose? If the use of a weapon by one accused is sudden and unexpected, liability for the consequences of its use will not be imposed on a co-accused.9 These points were re-iterated from the case of Docherty v H.M. Advocate by Lord Moncrieff.10 It can be concluded, therefore that an individual can be held liable for the unintended consequences of a course of criminal conduct if the conduct goes unforeseeably outwith the common plan or purpose, as seen in McKinnon. However, evidence of following a common purpose or plan is required as, if one cannot be found then art and part guilt can not be established. Finally, to the defence of an accused having been involved in criminal conduct, if he did not anticipate, plan or take part in unforeseen actions and decides to remove himself from the criminal activities, the courts will take a lighter hand than his co-accused, as seen in Walker and Raiker, and he may be acquitted. ...read more.

The student may also wish to have included the different forms of art and part liability that can be identified. For example, someone who holds the position of an official and allows a breach of the law to take place is art and part of that offence; or, where an innocent person is used as an agent by someone else to commit a crime (the other party will be convicted as art and part).