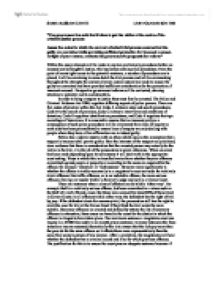 Assess the extent to which the current criminal trial process ensures that the guilty are convicted while providing sufficient protection for innocent accused. In light of your answer, evaluate the government's proposals for reform&quot;

"The government has said that it aims to put the victim at the centre of the criminal justice process Assess the extent to which the current criminal trial process ensures that the guilty are convicted while providing sufficient protection for innocent accused. In light of your answer, evaluate the government's proposals for reform" Within this essay attempts will be made to explore preliminary procedures before an accused can be bought to justice, this implicates certain police procedures. From the point of arrest right across to the potential sentence, a number of procedures are in placed. I will be examining in some detail the trial process and will be commenting throughout the attempts the current criminal justice system has made to ensure the guilty are convicted and have provided sufficient consideration for the protection of innocent accused. Prospective government reforms will be evaluated, drawing attention to potential merits and downfalls. In order to bring a suspect to justice they must first be arrested. The Police and Criminal Evidence Act 1984, regulates differing aspects of police powers. There are five codes of practice within the Act. Code A relates to stop and search procedures; Code B to the search of premises; Code C relates to interviews and conditions of detention; Code D regulates identification procedures; and Code E regulates the tape recordings of interviews. It is reasonable assume that an innocent party as a consequence of such police procedures will be eliminated from lines of inquiry as each code has been premeditated to ensure lines of enquiry are only dealing with people whom they have a firm affirmation are in indeed guilty. ...read more.

However the underlying fundamental reasoning for this is that unlike what happens when a fine is issued the money recovered in this order will be given directly to the victim instead of the state. This means that the victim does not have to fight for damages in civil courts. Here is an evident example of statutory provisions being made with the best interest of the victim in mind. The Crown Court hears all cases involving trial on indictment. It also hears appeals from those convicted summarily in the magistrates' courts. The Crown Court has the power at its disposal to confirm, reverse or vary any part of the decision at appeal at the conclusion of the hearing under (s 48(2) pf the Supreme Court Act 19 81). If the situation arises that the Crown Court has decided against the accused it then has the power to inflict any sentence which the magistrate could have inflicted, even if this means that it is consequentially more severe than the original imposed on the defendant. The Runciman Commission by Zander and Henderson is probably the most significant study of Crown Court cases embarked upon. Within this report 22,000 people were consulted who were involved in 3,000 Crown Court cases. This report included views of lawyers, judges, clerks, jurors, police and defendants. It is a startling fact that 8 % of cases who defence lawyers anticipated to be weak reached convictions and a further 6% of prosecution barristers thought weak and 4% of judges thought weak all reached convictions. ...read more.

of the case, and also of the effect on the defendant in terms of loss and reputation, but without any opportunity for defence and prosecution to agree the mode of trial. The labour government to f this day has consistently favoured giving the magistrates the right to make the decision, arguing that this would result in savings in excess of �1 million. Other significant change Proposals under consideration include the creation of an intermediate tier of jurisdiction to deal with some of the less serious offences currently categorised as either way. This could take the form of a District Judge sitting with the removal of magistrates' power of committal for sentence, including the right to jury trial for those accused of serious and complex offences. Lord Justice Auld's changes to the court structure themselves is not no means limited. He has argued for a creation of a single criminal court supported by a unified and nationally funded administration, but within a structure which would ensure a significant element of local control and accountability at both the summary and indictable offences level. He has put forward the idea that cases should start and finish in the court or at the jurisdictional level where they are to be tried. This would not only remove a lot of work that would be dealt with outside the criminal justice system altogether but would remove some of the lengthy and expensive cases of fraud and other financial misbehaviour from the criminal courts to a regulatory process. SABIA HUSSAIN 2235713 LAW FOUNDATION 1500 ...read more.