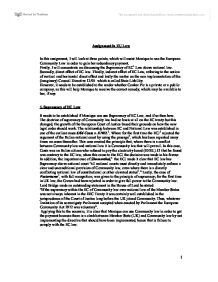 Assignment in EU Law In this assignment, I will look at three points, which will assist Monique to use the European Community Law in order to gain her redundancy payment. Firstly, I will concentrate on discussing the Supremacy of EC1 Law above national law. Secondly, direct effect of EC law. Thirdly, indirect effect of EC Law, referring to the notion of vertical and horizontal direct effect and lastly the matter on the non implementation of the (imaginary) Council Directive 12/05 which is called State Liability. However, it needs to be established to the reader whether Conker Plc is a private or a public company, as this will help Monique to receive the correct remedy, which may be available to her, if any. 1. Supremacy of EC Law It needs to be established if Monique can use Supremacy of EC Law, and if so then how. The doctrine of supremacy of Community law had no basis at all on the EC treaty but this changed, the growth of the European Court of Justice based their grounds on how the new legal order should work. The relationship between EC and National Law was established in one of the earliest cases 6/64 Costa v. ...read more.

It is very important for Monique to establish that Conker plc is a public company and not private in order to have grounds under direct effect of directive. In order that a company (organisation) is recognized as a public body, it must be providing a public service, under the control of the state with special powers. In the case of Foster,12 the ECJ sought out a preliminary ruling under Article 234 (ex 177), whether British Gas was a body of the kind against which the provisions of the Directive can be invoked. The CJ held in para18 that: 'The Court has held in a series of cases that unconditional and sufficiently precise provisions of a Directive could be relied upon against organizations or bodies which were to the authority or control of the State or had special powers beyond those which resulted from the normal rules applicable to relations between individuals.' The 'or' was changed to 'and' in Para 20 of the judgment so the definition can be narrowly applied or widely as the national courts may wish it to apply. So it was held that British gas was a public body providing a public function to the public, but in the case of Griffin ...read more.

The content of those rights is identifiable by reference to directive; and, 3. There exist a causal link between the breach of the state's obligations and the damage suffered by the person affected. Considering the above criteria, firstly does number 1 apply to Monique? The answer to this is yes, the directive 12/05 would have provided Monique with her redundancy payment- this directive gives the workers of at least two years continuous service entitlement to a minimum redundancy payment of one month's remuneration for each year of service, so as Monique has worked there for seven years she would qualify to receive this. Secondly, it is easy for Monique to bring action under this criterion as the UK government has been in breach with the Community law by not implementing the directive. ECJ stated in Pecheur that the principle in Francovich applied whether it was an act or omission by the organ of the state, which caused this breach. Thirdly, Monique has not suffered in a physical sense but she has suffered a financial loss due to the fact that the directive had not been implemented resulting in her having no payment for her services, this would result in the state being liable and would now owe her compensation for the damages she has suffered. ...read more.