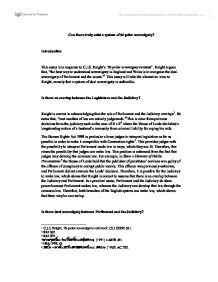 Can there truly exist a system of bi-polar sovereignty? Introduction This essay is in response to C.J.S. Knight's 'Bi-polar sovereignty restated'. Knight argues that, "the best way to understand sovereignty in England and Wales is to recognise the dual sovereignty of Parliament and the courts."1 This essay will take the alternative view to Knight, namely that a system of dual sovereignty is unfeasible. Is there an overlap between the Legislature and the Judiciary? Knight is correct in acknowledging that the role of Parliament and the Judiciary overlaps2. He notes that, "vast swathes of law are entirely judgemade."3This is clear from previous decisions from the judiciary such as the case of R v R4 where the House of Lords abolished a longstanding notion of a husband's immunity from criminal liability for raping his wife. The Human Rights Act 1998 in particular allows judges to interpret legislation as far as possible in order to make it compatible with Convention rights5. ...read more.

It is not possible that two bodies can both be sovereign because this would mean that neither can be supreme over the other. If neither body can be supreme over the other, this shows that the term sovereignty is inapplicable where two bodies have the same power. Therefore, Knight seems to misuse this term. It is not an accurate reflection of the concept of Sovereignty, to use the phrase "bi-polar sovereignty".7 One might even go so far as stating that the phrase "bi-polar sovereignty" contradicts itself. It is conceived that Parliament and the Judiciary both make laws in practice. However, it is clear from cases that where the Judiciary exercises its law making powers, and questions Parliament, there may still be conflict. For example, in A v Secretary of State for the Home Department8 the UK government derogated from the right to liberty9 and passed an Act which allowed for the detention of non-nationals if the Home Secretary believed that they were international terrorists10. ...read more.

Therefore, one cannot use the phrase "dual sovereignty" to suggest that the Judiciary and Parliament are sovereign because literally that is not possibly, nor is it possible in practice. It is accurate for Knight to contend that Parliament and the Judiciary share power, because in practice, that is what occurs. Yet both bodies cannot be sovereign in the sense that Knight argues (dual sovereignty). It would be more feasible to state that there is an interchangeable sovereignty between the Judiciary and Parliament, because in some situations Parliament may be sovereign, whereas in other situations, judges might be sovereign (e.g. in Human Rights cases). Word Count: 999 (including footnotes) 1 C.J.S. Knight, 'Bi-polar sovereignty restated', CLJ (2009) 361. 2 Ibid 362. 3 Ibid 372. 4 R v R (Rape: marital exemption) [1991] 4 All ER 481. 5 HRA 1998, s3. 6 Shaw v Director of Public Prosecutions [1962] AC 220. 7 C.J.S. Knight (n 1) 361. 8 [2005] 2 AC 68. 9 Article 5 European Convention on Human Rights and Fundamental Freedoms. 10 Anti-terrorism Crime and Security Act 2001, Section 23. ?? ?? ?? ?? ...read more.