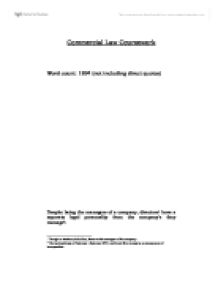 Commercial Law Coursework Word count: 1894 (not including direct quotes) Despite being the managers of a company, directors1 have a separate legal personality from the company's they manage2. However, a director can still be liable for the actions of himself, and of the company. To this end, the director has a range of duties, and failure to comply with these can result in liability. These duties are owed to the shareholders as a whole3, though minority shareholders are also protected by the law, with Stein v Blake4 perhaps the most recent clarification. Traditionally, capital holders have been owed these duties. However, s.309 of the Companies Act 1985 extended this view, meaning directors are now obliged to regard the interest of employees. The case of Liquidator of West Mercia Safetywear v Dodd5 clarifies that a duty is owed to creditors by a director of an insolvent company6, and s214 of the Insolvency Act 1986 states that steps must be taken to minimise loss where insolvency is reasonably expected. There are a plethora of other duties owed by directors - the duty of skill and care, with Re City Equitable Fire and Insurance Co7 the leading case, with this standard illustrated perhaps most eloquently in Laguna8, with MR Lindley stating "If they (directors) act with such care as is to be reasonably expected of them...... they discharge their duty to the firm". The IA'86 sets out the modern standard regarding the duty of skill and care of directors - confirmed in Re D'Jan of London9, and the statute book is relatively burgeoning with Acts bestowing responsibilities and potential liability on directors10. ...read more.

Actual deceit, on the more stringent 'beyond reasonable doubt' criminal test, has to be proved for the prosecution to be successful under the criminal charge of fraudulent trading, an offence under s.458 CA'85. This crime carries a maximum custodial sentence of 7 years and possible disqualification as a director38. The liquidator could apply for the directors to be disqualified from taking "part in the promotion, formation or management of a company"39 as they are directors of an insolvent company and it would be up to the courts to decide whether the director was unfit. He cannot, however, apply for them to be prohibited from such a specific business sphere or any geographical restriction - R v Ward40 demonstrates that disqualification cannot be limited to a particular class of companies. The CCDA'86 conveys the duty of disqualifying directors of insolvent companies to the courts41 (should they be unfit), with the period of disqualification being between 2 and 15 years. This unfitness is decided by a range of factors42, with Re Lo-Line43, suggesting most erroneous acts or omissions would not be sufficient, but in insolvency cases they have particular regard to the extent of the director's responsibility44 for the company becoming insolvent45 and their failure to perform services or deliver goods which creditors have paid for46. Though the courts may find the defendant unfit, they can take into account whether he has reformed when fixing the disqualification period (though constrained by 2 year minimum)47. Disqualification is not seen by the legal community as a punitive measure, with LJ Dillon, in Re Sevenoaks48, saying "it is beyond dispute that the purpose of s.649 is to protect the public". ...read more.

(1) Where the court makes a declaration under s.213 or s.214 of the Insolvency Act that a person is liable to make a contribution to a company's assets, then, whether or not an application for such an order is made by any person, the court may, if it thinks fit, also make a disqualification order against the person to whom the declaration relates. (2) The maximum period of disqualification under this section is 15 years. 36 As in Re Gerald Cooper Chemical [1978] 1 Ch 262 37 Criminal cases for fraud are notoriously difficult to gain a successful conviction and, due to the complex facts and legal arguments, are often summary, judge-only, trials 38 Under s.2(1) CDDA 1986 - "where he is convicted of an indictable offence in connection with the promotion formation, management....of a company". The maximum term of disqualification is 15 years - s.2(3). Also covered by s.4CCDA'86 39 S1(1) CDDA'86 40 The Times, 10 August 2001 41 S(6) CDDA'86 42 See Appendix D 43 Re Lo-Line Electric Motors [1988] Ch 477 - "Ordinary commercial misjudgement not sufficient" though "in an extreme case of gross negligence or total incompetence disqualification may be appropriate" - VC Browne-Wilkinson 44 Though Re Peppermint Pink cite found that even being abroad for the entire length of directorship didn't relieve a directors duty to creditors. 45 CCDA'85, Sch.1, part II, para.6 46 CCDA'85, Sch.1, part II, para.7 47 Re Migration Services International [2000] 1 BCLC 666 48 Re Sevenoaks Stationers (Retail) [1991] Ch 164 49 Of the CDDA'86 ?? ?? ?? ?? ...read more.