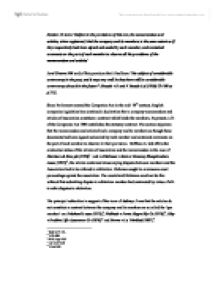 In Bradford Banking Co. v. Briggs, the articles gave the defendant company a lien on its members' shares. The plaintiffs, who were equitable mortgagees of certain shares, brought an action against the mortgagors and the company to enforce their security. The company claimed priority for their lien. Lord Blackburn said, "...the only one of the articles of association which I think it material to notice is the 103rd article ... I think it bound's to the company as much as if he had at the time he became holder of these shares executed a covenant to the company in the same terms as article 103, but I do not think it was bound any further..." In Wood v. Odessa Waterworks Co, which was an action by the plaintiff on behalf of himself and all other shareholders against the company, Stirling J. said,"...The articles of association constitute a contract not merely between the shareholders and the company, but between each individual shareholder and every other..." In Salmon v Quin & Axtens Ltd, Farwell LJ, referring to this last statement, said, "...I think that that is accurate subject to this observation, that it may well be that the Court would not enforce the covenant as between individual shareholders in most cases..." In Welton v. Saffery, Lord Herschell, who dissented on the main question from the rest of the House, made the following general observation, '...Sect. 16 of the Act of 1862 provides that the articles of association, when registered, shall bind the company and the members. Thereof to the same extent as if each member had signed his name and affixed his seal thereto...' ...read more.

The quality of the jurisprudence is not beyond reproach. In terms of statutory interpretation, the judiciary has ignored the express wording of s.14, which states that the statutory contract extends to 'all provision of the memorandum and articles of association' this was supported by R. Gregory. There is change in s.33 that as opposed to section 14(1) using the words 'memorandum and articles', s. 33 uses 'company's constitution'. The controversy the case of Hickman was conflicting by Quinn and Axtens. Lord Wedderburn based his thoughts upon the case of Quinn and Axtens in opposition of Astburys judgment in Hickman. Goldbergs resigned with his middle path, stating that all articles of appointment are interests for shareholders as well as members. Outsider rights in articles are within the scope of s. 20, since if this was not the case than a line of cases starting with 'qua member' cases would not be taken a precedent. s. 20 statutory contracts was taken in McKewan, where he stated it is not a part of the duty of courts to find reasons to avoid contracts. Rather it is their duty to support those contracts and to not avoid them. There is simply too much authority for outsider rights to be ruled as unenforceable. In the Eley case should had been treated as authority for one principle which was not even represented in any of those judgments. Astbury J less consideration of past cases in Hickman, and his overruling of Hampson was worthy of credit. 1 BBC 475 CA 2 1 Ch 881 3 8 Ch App 956 4 LR 9 CP 503 5 1 ExD 88 6 37 Ch D 1, CA 7 R Gregory (1981) 44 MLR 526 8 3 All ER 214 9 CLJ 194 10 35 MLR 11 2 hare 461 ?? ?? ?? ?? ...read more.