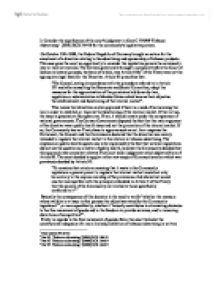 Consider the significance of the court's judgment in Case C-376/98 'Tobacco Advertising' [2000] ECR I-8419 for the community's legislative powers.

2. Consider the significance of the court's judgment in Case C-376/98 'Tobacco Advertising' [2000] ECR I-8419 for the community's legislative powers. On October 19th 1998, the Federal Republic of Germany brought an action for the annulment of a directive relating to the advertising and sponsorship of tobacco products. This case gave the court an opportunity to consider the legislative powers the community may or may not exercise. The German government brought a complaint before the Court of Justice on several grounds, the basic of which, was Article 100a1 of the Treaty was not the appropriate legal basis for the Directive. Article 95 prescribes that: "The Council, acting in accordance with the procedure referred to in Article 251 and after consulting the Economic and Social Committee, adopt the measures for the approximation of the provisions laid down by law, regulation or administration in Member States which have as their objective the establishment and functioning of the internal market". This means that directives can be approved if there is a need of harmonising the law in order to establish or improve the functioning of the internal market. If that is true, the issue is genuinely a European one. ...read more.

national rules to continue to exist, without the concomitant benefit of allowing free circulation for products or activities which met the Community rules. However, the rather sweeping general comments about not using Article 95 to ban an activity do raise the general issue about whether that provision can be used to replace a legitimate national prohibition. The legislative powers the Community may exercise are regulated by the rules bestowed on it by the various Treaties. These rules were themselves set up by the member states (rules that came from their different constitutional traditions) and given for the community to apply. This means that whatever the approach the member state in question has towards the community it is always restricted by the Treaties, as it is the Treaties that dictate the range of the member states' powers. But who is to decide whether one member state has abused its power? This arbitrary role is given to the European court of Justice, this body is there to prove that the community does not possess universal legislative power. Article 5 of the Treaty of the Maastricht Treaty states: "The Community shall act within the limits of the powers conferred upon it by this Treaty and the objectives assigned to it therein."7 These ...read more.