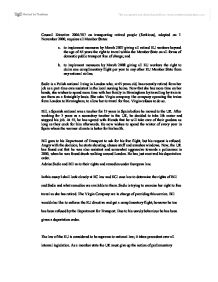 Council Directive 2004/707 on transporting retired people (fictitious), adopted on 1 November 2000, requires all Member States: a. to implement measures by March 2007 giving all retired EU workers beyond the age of 65 years the right to travel within the

Council Directive 2004/707 on transporting retired people (fictitious), adopted on 1 November 2000, requires all Member States: a. to implement measures by March 2007 giving all retired EU workers beyond the age of 65 years the right to travel within the Member State on all forms of domestic public transport free of charge; and b. to implement measures by March 2008 giving all EU workers the right to claim one complimentary flight per year to any other EU Member State from any national airline. Sadie is a Polish national living in London who, at 65 years old, has recently retired from her job as a part-time care assistant in the local nursing home. Now that she has more time on her hands, she wishes to spend more time with her family in Birmingham by travelling by train to see them on a fortnightly basis. She asks Virgin company, the company operating the trains from London to Birmingham, to allow her to travel for free. Virgin refuses to do so. Bill, a Spanish national was a teacher for 15 years in Spain before he moved to the UK. ...read more.

The directive meets the requirements of being "clear, precise and unconditional."9 The Ratti10 case uncovered a limitation to direct effect which was, that a directive is not applicable before the "time limit for implementation has expired." This does not apply in this case as the last date for implementation was March 2008 this directive now has authority over any national law. The two types of direct effect are vertical or horizontal. Vertical direct effect is where the individual can only claim "against the state or state entity."11 The horizontal effect is where the individual claims against a private body. In this case only vertical effect is to be applied as the directive applies to public bodies. The notion of a public body is an organisation that is an organ of the state. This was clarified in the Foster12 Case where the ECJ ruled "...a body, whatever its legal form, which has been made responsible, pursuant to a measure adopted by the State, for providing a public service under the control of the State..."13 There must be a service being provided to the public and the organisation must be in control of the state, however what constitutes as control has not been clarified. ...read more.

A fine start but a more appropriate use of case law to illustrate legal principles would help this student achieve higher marks.