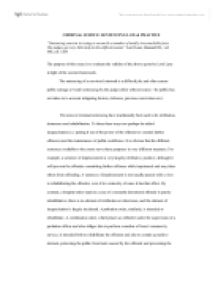 CRIMINAL JUSTICE: SENTENCING LAW & PRACTICE "Sentencing consists in trying to reconcile a number of totally irreconcilable facts. The judges get very little help in this difficult matter"Lord Lane, Hansard HL, vol 486, col. 1285 The purpose of this essay is to evaluate the validity of the above quote by Lord Lane in light of the current framework. The sentencing of a convicted criminal is a difficult job, and often causes public outrage at 'weak' sentencing by the judge (often without reason - the public has not taken in to account mitigating factors, defences, previous convictions etc.) The aims of criminal sentencing have traditionally been said to be retribution, deterrence and rehabilitation. To these there may now perhaps be added: incapacitation (i.e. putting it out of the power of the offender to commit further offences) and the maintenance of public confidence. It is obvious that the different sentences available to the courts serve these purposes in very different measures. For example, a sentence of imprisonment is very largely retributive, punitive, although it will prevent the offender committing further offences while imprisoned and may deter others from offending. A sentence of imprisonment is not usually passed with a view to rehabilitating the offender, even if in a minority of cases it has that effect. ...read more.

The matters which may, in a proper case, mitigate the seriousness of an offence or the severity of a sentence are legion. They may, depending on all the facts, include such matters as: uncharacteristic behaviour under the influence of intoxication, the voluntary payment of compensation, lapse of time since commission of the offences, the consequences of conviction or sentence, responsibility for dependents, youth or old age, emotional stress, financial need, illness or disability; assistance to the police; provocation. In most cases the two most potent grounds of mitigation are likely to be an early plea of guilty and a previous good character. An example of this is Aug Ref (No.106.of 2002) Jan 31st,2003,CA, Defender Hall who was charged with two counts of sexual intercourse with a girl aged 12 years old and received 12 months for each offence. He pleaded guilty to the two offences which is on its own is a mitigating factor. However its a little more complicated, as shown below. Aggravating Factors Mitigating Factors - Age differential between offender - Relationship between offender and victim. and victim (consensual) - multiple offence (instigated by - No previous convictions offender) for sexual offences (could be other different offences) - effect on the victim - Offender not in position of (impact statement from girls trust (does not mitigate in this mother, in her opinion the offence) ...read more.

The Court of Appeal has from time to time issued decisions which are specifically referred to a "guidelines" for future use. However, even these "guidelines" do not deprive judges of their discretion over the sentences which are ultimately imposed in individual cases. The Court of Appeal has always been wary of giving the impression that its decisions are to be regarded as absolutely authoritative and has often stressed that each case depends on its own facts. The Government has sought to encourage the Court of Appeal to produce sentencing guidelines for a wider range of criminal offences on a more systematic basis. Section 80 of the Crime and Disorder Act 1998 requires the Court of Appeal to consider producing or revising sentencing guidelines, whenever it hears an appeal against sentence, reviews a sentence referred to it by the Attorney-General under the Criminal Justice Act 1988, or receives a proposal from the Sentencing Advisory Panel established under section 81 of the 1998 Act. In considering guidelines, the Court must have regard to: ??the need to promote consistency in sentencing; ??the pattern of sentencing for similar offences; ??the cost and effectiveness of different sentences; and ??the need to promote public confidence in the criminal justice system. Any guidelines produced must include criteria for determining the seriousness of offences, including criteria for determining the weight to be given to any previous convictions of offenders or any failure to respond to previous sentences. ...read more.