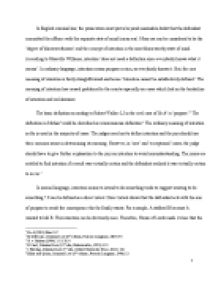 ﻿In English criminal law, the prosecution must prove beyond reasonable doubt that the defendant committed the offence with the requisite state of mind (mens rea). Mens rea can be considered to be the ?degree of blameworthiness? and the concept of intention is the most blameworthy state of mind. According to Glanville Williams, intention ?does not need a definition since everybody knows what it means?. In ordinary language, intention means purpose or aim, as everybody knows it. But, the core meaning of intention is fairly straightforward and hence ?Intention cannot be satisfactorily defined.? The meaning of intention has caused problems for the courts especially on cases which lied on the borderline of intention and recklessness. The basic definition according to Robert Walker LJ in the civil case of Re A[1] is ?purpose?.[2] The definition in Mohan[3] could be described as commonsense definition.[4] The ordinary meaning of intention so far is used in the majority of cases. The judges need not to define intention and the jury should use their common sense in determining its meaning. However, in ?rare? and ?exceptional? cases, the judge should have to give further explanation to the jury on intention to avoid misunderstanding. The jurors are entitled to find intention if a result was virtually certain and the defendant realized it was virtually certain to occur.[5] In normal language, intention means to intend to do something tends to suggest wanting to do something.[6] It can be defined as a direct intent. Direct intent shows that the defendant acts with the aim of purpose to result the consequence that he finally wants. For example, A stabbed B because A wanted to kill B. This intention can be obviously seen. Therefore, House of Lords made it clear that the legal meaning of ?intention? is the ordinary meaning of the word.[7] But, the legal meaning of ?intention? basically has the wider definition. Another not-obvious legal meaning of ?intention? is to intend to do something without wanting to do it or having it as part of your reason to do it.[8] It means the consequence is not your main purpose or aim. ...read more.

Lord Bridge asked the juries to consider that if the defendant foresaw the consequence as natural consequence of his act, then they may infer that he intended it. Lord Bridge believed that the suggestion of ?natural consequence? conveyed the concept of virtual certainty, but the guidelines were still unclear. What he seemed to have meant is that a result will occur ?unless something unexpected supervened to prevent it.?[29] I think it is uncertain that ?natural consequence? should be relevant to the defendant?s mens rea. The problem in Moloney is the defendant did not foresee the risk of death or grievious bodily harm at all, as he said that he never conceived that what he was doing might cause injury to anybody. Therefore, anything said about foresight of natural consequence was not binding. In this case, the juries have to find out how were the circumstances when the incident happened. The question was what was in the defendant?s mind when he pulled the trigger. If he knew that the gun was pointing at the stepfather?s head, the defendant intended to kill. On the other hand, if the defendant was in drunken condition and lacked intention, he never knew where he was pointing at, then he should have been convicted manslaughter and hence the mens rea is recklessness. I agree with the second presumption which also the jury thought it might be true. In Hancock and Shankland[30], the Court of Appeal held that the Moloney guidelines were misleading and quashed the conviction. In contrast with the ?natural consequence? guidelines, Lord Scarman pointed out that it should be explained to the jury that the greater the probability of consequence, the more likely it is that the consequence was foreseen and that if the consequence was foreseen, the more likely it is that it was intended.[31] Clearly, they require a reference to probability. Lord Scarman distinguished the mens rea of intention from the evidence needed to prove it. ...read more.

As we all know, recklessness in not intention. From the discussions above, clearly there are distinction between intention and recklessness, and hence intention cannot overlap with the meaning of recklessness. Thus, what is the meaning of recklessness? For many years the law on recklessness was confusing because there were two definitions of recklessness - Cunningham recklessness and Caldwell recklessness. However, the House of Lords abolished Caldwell recklessness as it contrasted with negligence. Now, there is only one kind of recklessness ? Cunningham recklessness. Generally, recklessness means taking an unjustified risk. In Cunningham[47], Byrne J explained that recklessness meant that ?the accused has foreseen that the particular kind of harm might done and yet has gone on to take the risk of it?.[48] In my words, recklessness can be explained as the defendant is merely being extremely careless but he has no intention to commit a crime, however in being recklessness he may end up in causing damage. As conclusion, the moral definition of intent has largely been laid down in murder case. Since murder is a particularly serious crime, it must be defined exactly; in other words, what a jury does is to consider the accused?s moral sense, not depend on their likes or dislikes. However, there is difficulty which requires the jury to look into men?s minds. The defendant may deny his intention to commit a crime and intended to cheat the administration of justice. With that, the jury could find difficulty to find willful blindness. Otherwise, can the jury correctly estimate evidence of states of mind? It can never be a sufficient ground to estimate that. [49] This is a problematic area because the juries do not have intention metres to ?plug into people?s brains.?[50] Moreover, in 2006, the Law Commission published a report suggesting the reform of murder to incorporate First Degree and Second Degree Murder.[51] The report also recommended that Woollin should incorporated into a statute. However, there have so far been no moves to implement this either. Thus, today, the definition of intention remains uncertain. ...read more.