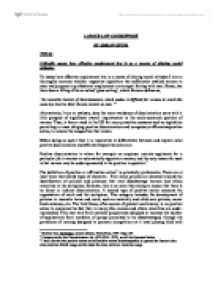 Critically assess how effective employment law is as a means of altering social attitudes.

LABOUR LAW COURSEWORK BY ADRIAN SHUM. TITLE: Critically assess how effective employment law is as a means of altering social attitudes. To assess how effective employment law is a means of altering social attitudes I aim to thoroughly examine whether respective legislation has sufficiently enabled women to enter and progress in professional employment on an equal footing with men. Hence, has there been a lifting of the so called 'glass ceiling', which Browne defines as, "An invisible barrier of discrimination which makes it difficult for women to reach the same top level in their chosen careers as men."1 Alternatively, I aim to evaluate, does the mere avoidance of discrimination carry with it little prospect of significant overall improvement in the socio-economic position of women. Thus, is there a need in the UK for more proactive measures such as legislation permitting or even obliging positive discrimination and compulsory affirmative/positive action, to remove the inequalities that remain. Before doing as such I feel it is imperative to differentiate between and explain what positive discrimination and affirmative/positive action are. Positive discrimination is where for example an employer restricts applicants for a particular job to women or automatically appoints a woman, and the only reason for such is that women may be underrepresented in the position in question.2 The definition of positive or affirmative action3 is potentially problematic. There are at least three interrelated types of objective. First many policies are directed towards the identification of policies and practices that may disadvantage women and ethnic minorities in the workplace. However, this is no more than acting to ensure that there is no direct or indirect discrimination. A second type of positive action concerns the organisation of work and the workplace. This category includes the development of policies to reconcile home and work, such as maternity and child care policies, career break schemes, etc. The third focus, often source of greatest controversy, is on positive action to overcome the fact that, in many jobs, women and ethnic minorities are under-represented. ...read more.

Failure to comply after this will result in the OFCCP directly enforcing the Order, or having legal sanctions placed upon the defaulting employer. This would prevent them from being eligible for further contracts as well as forfeiture of payments on current contracts. The deterrent has proved extremely powerful along with the threat of bad publicity that goes with it. In over 40 years, only 36 employers have suffered the maximum penalty. All the employers interviewed in the US stated that affirmative action was the most influential requirement in their organisation.41 Without which they would not have been motivated nor have had the will or initiative to increase the representation of women and minorities through their organisation on the scale they had done so. The strength of this belief can be summed by an Equal Opportunity manager who stated, "We have doubled our representation of women and minorities since adopting affirmative action plans in the 1970's, we are now as diverse as we can be."42 Actual statistics back up the success of affirmative action in the USA, for example a study by Murrel and Jones reported: "Six million women have received opportunities in employment and education directly because of affirmative action programs. Between 1970 and 1990, the proportion of women physicians doubled from 7.6% to 16.9%. From 1972 to 1979 -- the years when affirmative action programs were most vigorously enforced -- the number of women becoming accountants, lawyers and judges, and school administrators increased substantially. And during the 10-year period between 1985-95 the overall number of professional women grew 125%.43 The US experience with affirmative action has been influential in several other counties namely, Canada44, where the concept of 'employment equity is used'45, as well as in Australia46 and South Africa47. Of greatest relevance in the UK (i.e. in Northern Ireland) is the Fair Employment Act 1989, which obliges employers with more than 10 full-time employees to carry out periodic reviews to ensure fair participation of Roman Catholic and Protestants communities.48 Statistics must be ...read more.