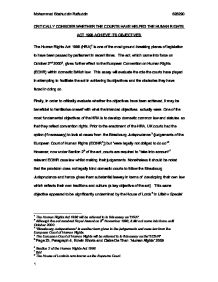 CRITICALLY CONSIDER WHETHER THE COURTS HAVE HELPED THE HUMAN RIGHTS ACT 1998 ACHIEVE ITS OBJECTIVES The Human Rights Act 1998 (HRA)1 is one of the most ground-breaking pieces of legislation to have been passed by parliament in recent times. The act, which came into force on October 2nd 20002, gives further effect to the European Convention on Human Rights (ECHR) within domestic British law. This essay will evaluate the role the courts have played in attempting to facilitate the act in achieving its objectives and the obstacles they have faced in doing so. Firstly, in order to critically evaluate whether the objectives have been achieved, it may be beneficial to familiarise oneself with what the intended objectives actually were. One of the most fundamental objectives of the HRA is to develop domestic common law and statutes so that they reflect convention rights. Prior to the enactment of the HRA, UK courts had the option (if necessary) to look at cases from the Strasbourg Jurisprudence3 (judgements of the European Court of Human Rights (ECtHR4)) but "were legally not obliged to do so"5. However, now under Section 26 of the act, courts are required to "take into account"7 relevant ECtHR case law whilst making their judgements. Nonetheless it should be noted that the provision does not legally bind domestic courts to follow the Strasbourg Jurisprudence and hence gives them substantial leeway in terms of developing their own law which reflects their own traditions and culture (a key objective of the act). This same objective appeared to be significantly undermined by the House of Lords8 in Ullah v Special Adjudicator9; where it was held that domestic courts should now not only acknowledge ECtHR cases, but should also follow them if they are "clear and constant"10. This judgement explicitly contradicts section 2 of the act and resulted in vast legal confusion arising as a result of a "judge-made"11 restriction on the law. ...read more.

However, the defendant argued this provision conflicted with his right to a fair trial and accordingly, the HOL controversially amended the legislation to allow the defence to interrogate r**e victims on their s****l past. Not only had the courts gone against previous judgements in regards to their role under Section 3 but here they also declared a judgement which seems to be both legally as well as morally unjust. It was not the only option available to the courts. An alternative could have been to issue a "declaration of incompatibility"48 under Section 4 which would have sent the legislation to parliament to revise. The principle of "declaration of incompatibility"49 is a tool given to the courts if they are unable to interpret legislation in a way which is compatible with convention rights. This is highlighted in Section 4 of the act and is used in order to achieve the objective that domestic laws should be compatible with convention rights and was used by the courts in Bellinger v Bellinger (2003). In Bellinger, the claimant claimed that the court should issue a declaration of incompatibility in regards to s11(c) of the Matrimonal Causes Act 50which did not acknowledging people who had undergone gender re-assingment. The claimant argued this had overtly violated Articles 851 and 1252 of his convention rights and the courts held in favour of the claimant and issued the declaration. The courts then used Section 1053 of the act which enabled a "fast track"54 procedure to make legislation compatible with convention rights. Thus, parliament removed the incompatibility by enacting the Gender Recognition Act 200455 which acknowledged individuals with a gender transplant. This suggests that the courts have understood their role and are aware of their powers in terms of issuing a declaration of incompatibility to ensure all legislation is compatible with convention rights and attempting to develop statute and common law to reflect convention rights hence, evidently attempting to achieve the objectives of the HRA. ...read more.