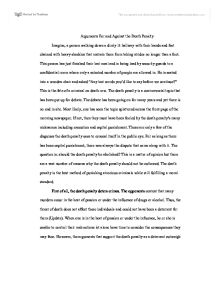 Arguments For and Against the Death Penalty Imagine, a person walking down a dimly lit hallway with their hands and feet chained with heavy shackles that restrain them from taking strides no longer than a foot. This person has just finished their last meal and is being lead by security guards to a confidential room where only a selected number of people are allowed in. He is seated into a wooden chair and asked "Any last words you'd like to say before we continue?" This is the fate of a criminal on death row. The death penalty is a controversial topic that has been put up for debate. The debate has been going on for many years and yet there is no end in site. Most likely, one has seen the topic splattered across the front page of the morning newspaper. If not, then they must have been fooled by the death penalty's many nicknames including execution and capital punishment. Those are only a few of the disguises the death penalty uses to conceal itself in the public eye. For as long as there has been capital punishment, there was always the dispute that came along with it. The question is: should the death penalty be abolished? This is a matter of opinion but there are a vast number of reasons why the death penalty should not be outlawed. ...read more.

Whites have continued to encompass the majority on death row in 2000 (Eddlem). There were 1,990 white inmates, 1,535 blacks, and 68 others. In the same year, 49 out of the 85 put to death were white (Eddlem). Plus, the fact of the matter is that white people are 2.6 times more frequently killed by a black person than a black person to be killed by a white person (Eddlem). Black people just tend to commit more crimes than the white population. Thus, how can the system be r****t if it is only serving justice? The death penalty is a controversy that has plagued the United States court system for many years. The United States has allowed each state to decide whether to prohibit the death penalty or to permit the harsh sentence. Currently, 38 out of the 50 states have capital punishment (Death). Even so, the public seems to support the death penalty rather than reject it. According to a 1997 Newsweek poll, 74% of people defend capital punishment for the reason that it eliminates the chance that the criminal will murder again. (Death) As the quarrel rages on, I agree with the 74% of Americans that are pro-capital punishment. The reason being that the death penalty is a deterrent, serves justice, not cruel and unusual, the mistakes are now nearly nonexistent, and the death penalty is in no way r****t. ...read more.