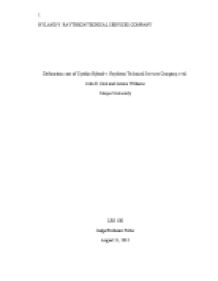 ﻿HYLAND V. RAYTHEON TECHICAL SERVICES COMPANY Defamation case of Cynthia Hyland v. Raytheon Technical Services Company, et al. John E. Zoul and Jessica Williams Strayer University LEG 100 Judge/Professor Potter August 21, 2012 ________________ Defamation case of Cynthia Hyland v. Raytheon Technical Services Company, et al. Opening Statement Good evening, Your Honor and ladies and gentlemen of the jury. My name is John Zoul and it is my privilege along with my associate, Jessica Williams, to represent Cynthia Hyland in a defamation lawsuit versus Raytheon Technical Services Company (RTSC), which is a wholly owned subsidiary of Raytheon, Inc. and a Fortune 100 company which has been listed on the New York Stock Exchange for over half a century. Cynthia Hyland was a dedicated, loyal employee and executive of Raytheon for approximately twenty-one years. She was promoted numerous times. She always earned high marks on her annual performance reviews until after a consulting assessment of the President of RTSC, Bryan Even, turned-up some honest, candid and meant to be helpful and confidential remarks, concerning Mr. Even, by Ms. Hyland. This information was transmitted to Mr. Even, through the VP of HR of RTSC, who had been told by the consultants. Subsequently, Mr. Even on February 28, 2003, gave Ms. Hyland a scathingly negative review, containing five, what we believe are defamatory statements concerning Ms. ...read more.

Blaylock. ?Factual statements made to support or justify an opinion can form the basis of an action for defamation?: Richmond Newspapers, Inc. v. Lipscomb. Speech constitutes a non-actionable statement of opinion if it ?does not contain a provably false factual connotation? or ?cannot be interpreted as stating actual facts about a person?: Fuste, 265 Va. At 132, 575 S.E. 2d at 861. Speech is also non-actionable if its perceived accuracy is largely dependent on one?s viewpoint. Id.: Chaves v. Johnson, 230 Va. 112, 119, 335 S.E. 2d 97, 101 (1985). Defamation per se: a statement either must impute (attribute) to a person?s unfitness to perform the duties of an office or employment or must prejudice that person in his or her profession or trade. Conclusion ?Defamation is an intentional communication to a third party of an untrue statement, asserted as fact that injures the plaintiff?s reputation by exposing him or her to hatred, ridicule or contempt (Bagley and Savage, 2010, p. 289).? This is precisely what occurred when the President of RTSC on February 2003, when Bryan Even, the defendant, made malicious statements, which he knew to be false or were made with reckless disregard of whether it was false or not. By clear and convincing evidence the statements at issue were made knowing they were false or so recklessly as to amount to a willful disregard for the truth. ...read more.

He discusses Hyland?s performance review with the CEO of Raytheon 16. July 3, 2003, the CEO sends a memo to Even concerning Hyland, ?We are at the decision point. If she recognizes her issues and wants to work to improve, let?s do everything we can to support her. If she continues in denial, we?ll need to make a change.? Even considered this memo to be a green light to fire Hyland. 17. July 23, 2003, Even and the VP of HR (Miller) meet with Hyland. Even tells Hyland she had refused to accept the feedback he gave her and that this had created a problem with her peers. He then terminated her employment. These are the facts. We believe it is very clear that Mr. Even felt threatened and insulted when the consultants gave him his performance review, which stated he had some leadership issues. When he subsequently found out from the VP of HR, Ms. Miller, that it was Hyland who had spoken in negative terms about his leadership abilities, he totally changed course concerning his treatment of Ms. Hyland. He invented things concerning Hyland?s own abilities and made insulting remarks concerning her communication skills, which had not been criticized previously. So, ladies and gentlemen of the jury, I believe it is clear that Mr. Even felt he needed to get even with Ms. Hyland and we see exactly what he has wrought upon Ms. Hyland as well as upon RTSC. I ask that you find in favor of finding for the plaintiff, Ms. Cynthia Hyland. Thank you. ...read more.