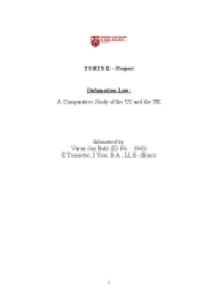 Defamation Law: A Comparative Study of the US and the UK

Parties involved-public and private figures[41]. The American courts believe public has a right to criticize the people who govern them, so they give the least protection from defamation to public officials. When officials are accused of something that involves their behaviour in office, they have to prove all of the elements of defamation and they must also prove that the defendant acted with "actual malice, which was defined in the New York Times case as "knowledge that the information was false" or that it was published "with reckless disregard of whether it was false or not.".[42] People who aren't elected can still be considered public figures because they are influential or famous -- like movie stars ? and thus also have to prove that defamatory statements were made with actual malice, in most cases.[43] Private people who are defamed have more protection than public figures -- freedom of speech isn't as important when the statements don't involve an issue of public interest. A private person who is defamed can prevail without having to prove that the defamer acted with actual malice. In fact, in their focus on free speech, the US courts have even granted constitutional rules for private defendants, in case the matter is of a public concern. However, the system is not without flaws. Public officials can include even a deputy sheriff.[44]The case of Cohen v Marx[45], as well as the New York Times case indicate that American courts not only define public figures as any person in the public limelight, to the extent that a high school coach was considered a public figure in a defamation case,(Brewer v Rogers 439 S.E.2d 77.[46] The impact of this unclear definition results in low success rates for the plaintiff- A study indicates that only 10 per cent of media defamation cases result in success for the plaintiff in the US.[47] In the UK, there is no such clear distinction between private and public plaintiffs. ...read more.

Thus the researcher advocates adoption of this rule. 1. Clarity with respect to the role of Internet Service Providers- This aspect is heavily disputed in many countries including Canada, the US, and the UK[77], and thus, the researcher feels that the issue must be adequately addressed in the shortest time possible, as the Internet grows on an exponential rate.[78] 1. A balance with respect to the burden of proof- The English concept of defamatory statements being presumed false has been heavily criticised as favouring the plaintiffs, and making it easier to restrict free speech.[79] In light of India, and the influence of the media, a balance needs to be found between the desire to respect private reputation and the desire to protect free speech. Despite having given these recommendations, the researcher must warn that the changes be made carefully and in a gradual manner, as one must not forget the sheer complexity of both defamation law, as well the unique Indian society. Conclusion It is submitted that in this research paper, the researcher?s analysis of the defamation laws of the US and UK, has raised three points. Firstly, that defamation is a tort which varies greatly in theory, application, and principles. The societal factors and fundamental notions of the concerned countries and its social actors play a huge role in determining its development. Secondly, the US and the UK follow contrasting policies on defamation, and have taken opposite sides on the debate between reputation and free speech. Thirdly, India?s own position is a confused one, a mixture of archaic statutes and case law. Thus, the main purpose of suggesting a system for India to follow has been difficult to implement, and the researcher has proved his opinion on the issues to be dealt with and how to deal with them, keeping in mind the laws of US and UK on defamation. The researcher believes that India?s law must develop a unique system that works for its society and media, while absorbing the positive aspects of defamation law from abroad, in order to attain the central goals of judicial stability and clarity. ...read more.