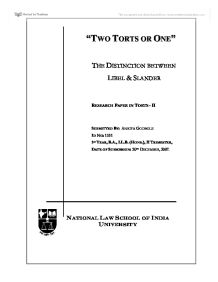 A bizarre fact of this decision is that Sir Mansfield, when deciding for the plaintiff honoured a doctrine in which he did not believe and ended up precluding anyone else from making modifications in the future.22 In contemporary England the law still remains as before. Libel is actionable per se23 and is a criminal wrong as well as a civil wrong. On the other hand slander is actionable on proof of special damages and is only treated as a civil wrong. The special damage must not be too remote but a legal and natural consequence of the words spoken.24 The common law also provides for four exceptions where slander is actionable per se. These are; (1) the imputation is of a criminal offence punishable with imprisonment, (2) the imputation of a disease that will lead to exclusion from society, (3) imputation of uncastity to a female which was made actionable per se by the Slander of Women Act 1891 and (4) imputation of unfitness or incompetence in any office, profession, calling, trade or business.25 It may be noted that the distinction between libel and slander is heavily criticised and its abolishment was advocated as early as 1843 by the Select Committee of the House of Lords. This was followed up by a similar recommendation by the Faulks Committee report in 1975.26 But the distinction still persists. As opposed to this certain jurisdictions have done away with the distinction on all counts, India, a common law country and also a colony of Britain being one such country. The following chapter will go on to examine the position of law as regards the libel - slander distinction in India. Chapter 2 The Libel - Slander Distinction and the Indian Law What is the position of law in India as regards the distinction between libel and slander? The position of law in India is different from that of England. ...read more.

and slander how long will it continue to do so before these distinctions to take on the fine nature of the past? Libel and slander then need to be assimilated. However the researcher believes that there can't be a permanent removal of the distinction, as some slanders do not deserve the degree of damages of others which holds true for libels as well. One cant advocate a complete revamping of the law, but instead of doing away with the distinction which is some scenarios might actually be valid, what should be done is the removal of the gross biasness that exists towards libel. That is, certain libels can be made actionable only on proof of special damages or the strictness of special damages in case of slanders can be removed in those countries where it exists. This, the researcher believes is how the law relating to defamation should evolve further in order that the present confusion can be solved. Conclusion The libel - slander distinction arose due to a deficiency in the law that preceded it. As the distinction gained solid footing however its true meaning was made obscure by the various decisions passed in the courts. Moreover this obscure and incorrect distinction became the accepted norm, to the extent that it could not be changed even by the best of judges despite several attempts. But the researcher believes that to make this distinction obsolete would return the law of defamation to its previous morass. Other viable steps must be taken to correct this seemingly absurd distinction. Hence, this distinction is too entrenched in the law to be completely discarded. It is justified, if implemented properly and if one considers the real reason as to why the distinction came about in the first place. However it must be modified to the extent that it incorporates the changes that have occurred in contemporary times and this is the next step that should be taken by the courts and judges in evolving the law of defamation. ...read more.