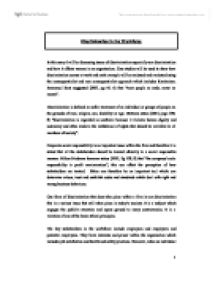 Discrimination in the workforce

Discrimination in the Workforce In this essay I will be discussing issues of discrimination especially sex discrimination and how it affects women in an organisation. Case studies will be used to show how discrimination occurs at work and each example will be analysed and evaluated using the consequentialist and non consequentialist approach which includes Kantianism. Immanuel Kant suggested (2001, pg 44, 6) that "treat people as ends, never as means". Discrimination is defined as unfair treatment of an individual or groups of people on the grounds of race, religion, sex, disability or age. McEwan states (2001, page 199, 8) "discrimination is regarded as unethical because it violates human dignity and autonomy and often leads to the withdrawal of rights that should be available to all members of society". Corporate social responsibility is an important issue within the firm and therefore it is stated that all the stakeholders should be treated ethically in a social responsible manner. Milton Friedman however states (2001, Pg 328, 8) that "the company's sole responsibility is profit maximization"; this can affect the perception of how stakeholders are treated. Ethics can therefore be an important tool which can determine values, trust and establish codes and standards which deal with right and wrong business behaviour. One form of discrimination that does take place within a firm is sex discrimination this is a serious issue that still takes place in today's society. It is a subject which engages the public's attention and opens ground to many controversies. ...read more.

Therefore as stated by Freeman's Stakeholder (2001, page 328 to 329, 8) theory narrow definition stakeholders should be treated fairly and the doctrine of fair contracts should be employed, with the rules of 'veil of ignorance' being followed. Therefore other directors should have a duty of care towards stakeholders including women executives. Aristotle (2001, page 27, 7) believed that "everyone can learn how to behave from experience and that we become moral by working at it". Sexual abuse and harassment is the second main issue of sex discrimination, Taylor defines sexual abuse and harassment as (2001, page 209, 8) "any interaction between two or more individuals with sexual implications or overtones in which at least one of the individuals involved is a devalued person. However there must also be a distinction between the perpetrator(s) and victim(s), which indicates that the interaction is neither solicited nor wanted by the victim(s)". Many ethical issues are raised as the victim is seriously affected and their right and values are degraded by such harassment. An article from (2003, The Guardian, 11) which has shown an individual who was affected by such sexual abuse as directors allegedly drove her close to a nervous breakdown. Men on board of the Healthcare recruitment company: Match Group sent her sexually explicit e-mails, "treated her with a mixture of ridicule and contempt". Two other city investors appointed a new chairman also treated women as "sex objects". She was later unfairly dismissed because they "did not like working with a woman". ...read more.

The rethinking of the firm's policies with staff training allowed staff to have understood the meaning of equality and allowing other minorities to work together on the shop floor and not be discriminated because of the colour of their skin. The balance of the workforce was restored and customers from other backgrounds shopped there more. This signifies the Kantian belief that humans should have more respect within the workforce no matter the colour of their skin. They should have equal rights during recruitment and the duty to make changes to ensure that the ends are better. Contract Compliance is a policy which tackles unfairness by discriminating in favour of enterprises which accomplish equal opportunity targets that show contemplation of equality during employment and recruitment selection.(2003, Government Website, 12) The Equal Opportunities Commission and The Commission for Racial Equality were established to promote and maintain equality opportunity within the workplace and as part of this responsibility; they produce codes of practice which provide guidelines to employers and employees on the meaning of the legislation. It ensures the compliance of the law, The Sex Discrimination Act (1975) Equal Pay Act (1974) and many other acts are broken up into certain segments which provide the employers and employees the protection within the organisation. (2003, Government Website, 11). In conclusion the examples shown in this essay provide evidence how discrimination affects an individual or a group of individuals within a workforce. Unethical behaviour carried out by organisations affects individuals greatly and therefore they believe that their basic human rights have been breached and by taking organisations to court also shows the public how companies operate therefore companies are liable to pay compensation and readdress the shareholders grievances. ...read more.