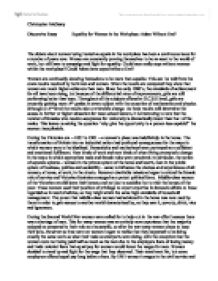 Discursive Essay Equality for Women in the Workplace: Adam Without Eve?

Christopher McGeary Discursive Essay Equality for Women in the Workplace: Adam Without Eve? The debate about women being treated as equals in the workplace has been a continuous issue for a number of years now. Women are constantly proving themselves to be an asset to the world of work, but still have to campaign and fight for equality. Could men really cope without women within the workplace? Could Adam have coped without Eve? Women are continually showing themselves to be more than capable. This can be told from the exam results received by both men and women. When the results are compared they show that women are much higher achievers than men. Since the early 1980's, the standards of achievement for all have been rising, but because of the differential rates of improvements, girls are still performing better than boys. Throughout all the subjects offered at G.C.S.E level, girls are presently gaining more A* grades in every subject with the exception of mathematics and physics although at A* level the results take a reversible change. ...read more.

The power that middle-class women had achieved in the home was now used by them in order to gain access to another world characterised by, as they saw it, poverty, drink, vice and ignorance. During the Second World War women were called for to help out in the war effort because there was a shortage of men. This for many women was an entirely new experience that the majority enjoyed as compared to their role as a housewife, so after the war many women chose to keep their jobs. However as time went on women began to realise that they happened to be doing exactly the same work as what their male counterparts were doing, with the exception that the women were not being paid half as much as the men due to the employers fears of losing money and trade unionist fears that equal pay for women would lower the wages for men. Women decided to stand up and fight for the wage that they deserved. ...read more.

Even when she began to pursue what would become The Body Shop, her environmentalism-minded skin- and hair-care company with more than 1,800 stores in 49 countries, Roddick's goal was not to be an icon. Roddick opened her first shop in 1976 with 25 hand-mixed products, eventually franchising The Body Shop and then going public in 1984. The Body Shop now offers more than 1,000 items and reached sales of more than $1 billion in 2000/2001. Although she no longer sits on The Body Shop's executive committee, Roddick still serves as co-chair, finds new products and keeps the company active in human rights, environmentalist and animal-protection issues. It just goes to show what a woman can achieve when they dive into the no longer man-driven-world as the independent woman. To answer the question to whether Adam could have coped without Eve, the answer could be given as simple as 'no'. Due to the way that women think and consider the possibilities, I believe that without Eve, the world would be in unflinching damnation if left to Adam alone. ...read more.