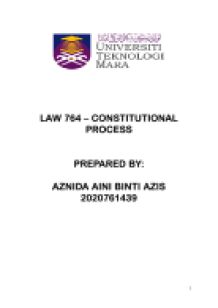 To put it in another way, the constitution holds a higher legal status than that of the legislative body. The parliament may legislate new regulations, but it is always subjected to the constitution. Thus, countries with a written constitution practises the doctrine of constitutional supremacy where any existing or recent law violates the norm of the Constitution will instantly be considered as null and void and certainly without any force and effect. This can clearly be seen in Article 4 of our very own Federal Constitution where it stated that this Constitution is the supreme law of the Federation and any law passed after Merdeka Day which is inconsistent with this Constitution shall, to the extent of the inconsistency, be void. In most countries, a Constitutionâ€™s supremacy is protected by the usage of the judicial review by the power of the courts to invalidate executive and legislative actions on the ground of unconstitutionality. By giving the court the right to review legislative and executive acts, the supremacy of the constitution is undoubtedly maintained. When a legislative or executive act violates the constitution, the court may declare it ultra vires and void. Examples are on the grounds when it has not been enacted in accordance with the procedure prescribed in the constitution or in the case of state law, it is inconsistent with federal law. While in the case of conflict between an ordinary law and the Constitution, the courts will declare the ordinary law to be null and void. Furthermore, the written constitution is also generally â€˜rigidâ€™, meaning that they are specific modes of amendment that needs to be adhered in order to enact, amend or repeal the provisions. This is undoubtedly another feature preserving the doctrine of constitutional supremacy where provisions are not flexible to be amended every single time when the legislative prefers to. In total, the administration of the written constitution puts its burden particularly on itself in general and also with the help of the judicial review in upholding its law. ...read more.

The parliament can check the activities of the executive. In parliamentary system also always representing diverse groups. In this system, the parliament offers representation to diverse groups of the country. This is especially important for a country like India. The parliamentary system is better than presidential system because of its flexibility. There is flexibility in the system as the PM can be changed easily if needed. During the Second World War, the British Prime Minister Neville Chamberlain was replaced by Winston Churchill. This is unlike the presidential system where he can be replaced only after the entire term or in case of impeachment or incapacity. There are also disadvantages of the parliamentary system in practice. There is no separation of powers between legislature and executive. Since there is no genuine separation of powers, the legislature cannot always hold the executive responsible. This is especially true if the government has a good majority in the house. Also, because of anti-defection rules, legislators cannot exercise their free will and vote as per their understanding and opinions. They have to follow the party whip. Sometimes, in the parliamentary system also have unqualified legislators. The system creates legislators whose intention is to enter the executive only. They are largely unqualified to legislate. Another disadvantages in practicing the parliamentary system is instability, since the governments sustain only as long as they can prove a majority in the house, there is instability if there is no single-largest party after the elections. Coalition governments are generally quite unstable and short-lived. Because of this, the executive has to focus on how to stay in power rather than worry about the state of affairs or welfare of the people. Besides that, the government sometimes failure to take a prompt decision: Because there is no fixed tenure enjoyed by the Council of Ministers, it often hesitates from taking bold and long-term policy decisions. ________________ [1] (Teacher L. (.) (Teacher, Law. (November 2013). Malaysian Practices of Parliamentary Democracies. ) [2] (https://www.studocu.com/my/document/amity-university/state-and-politics/parliamantary-and-presidential-system) ...read more.