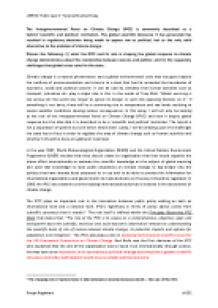 Discuss the following: (i) what the Intergovernmental Panel on Climate Change (IPCC) and its role in shaping the global response to climate change demonstrates about the relationship between science and politics; and (ii) the regulatory challenges that global crises raise for the state.

﻿LW592: Public Law 2 ? Special Studies Essay The Intergovernmental Panel on Climate Change (IPCC) is commonly described as a hybrid ?scientific and political? institution. The global scientific discourse it has generated has resulted in regulatory decisions being made to appear not as political, but as the only valid alternative to the problem of climate change. Discuss the following: (i) what the IPCC and its role in shaping the global response to climate change demonstrates about the relationship between science and politics; and (ii) the regulatory challenges that global crises raise for the state. Climate change is a natural phenomenon and a global environmental crisis that has gone beyond the confines of environmentalism and science to a level that has far exceeded the boundaries of economic, social and political concern. It can be said by certainty that human activities such as transport, industries etc. play a major role in this. In the words of Tony Blair ?Global warming is too serious for the world any longer to ignore its danger or split into opposing factions on it?. If something is not done, there will be a continuing rise in temperature and sea levels resulting to severe weather conditions causing serious consequences. In this essay, I will not only be looking at the role of the Intergovernmental Panel on Climate Change (IPCC) and how it shapes global response but the idea that it is described to be a ?scientific and political? institution. The hybrid is not a separation of spheres but one which entails both. Lastly, I will be drawing upon the challenges the state has to face in order to regulate the area of climate change such as human activities and whether it should be done at a global or local level. In the year 1987, World Meteorological Organisation (WMO) and the United Nations Environment Programme (UNEP) decided that they should create an organisation that that would organise the states effort internationally to evaluate the scientific knowledge on the subject of global warming ...read more.

The Kyoto Protocol itself aims to set targets for individual state to reduce greenhouse gasses which have to be made. The IPCC?s role has lead climate change to be seen as global issue which would then bring in international politics. The idea that the IPCCA?s role within science and politics creates vagueness which is important, by providing advice to policy makers globally, shows that there role is not just putting together research and knowledge collected from around the world but also that it shapes decisions made globally. Regulation: Climate change is an issue that affects us globally, issues such as rise in temperature and sea water could be highly consequential for the environment and the world. Various organisations, governments and industries have all been looking for solutions by implementing procedures in order to reduce the emission of greenhouse gases. There is high concern as to human activities being the cause of climate change, as illustrated by Dr Stott it is not only about the increase in temperatures but the melting of the ice in the Arctic, changes in rainfall patterns and humidity, ?all these different aspects of the climate system are adding up to a picture of the effects of a human influence on our climate"[3]. In order to tackle these issues, there has to be some international effort and global governance to not only make policy making cost effective but also to be successfully mitigated. In terms of shaping global response, the IPCC plays a pivotal role as there reports are the foundation from which governments would create policies. According to the second report, it was said that the highest cause of global warming is human activity, this was vital because this lead to the creation of the Kyoto Protocol. This shows the impact the IPCC has on a state and its regulation processes. It is clear that government involvement is necessary in order to reach the ?2050 GHG emissions reductions target? and it is clear that to reduce global warming governments must develop and maintain a regulatory system within each state, which would then have impact at a global level. ...read more.

Nonetheless, in terms of regulation, the United States was one who introduced the IPCC; the question is what makes the US the ones to follow? In addition, it is the US that are now opposing against climate regimes, which then in turn reflects important features of global science and politics by the IPCC. In conclusion, there is a co-production between science and politics, like the way the IPCC select certain individuals from different countries and exclude those from developing countries. Also when they say that scientist in developing countries do not have that expertise and knowledge therefore invalidating their views from the panel. It has been a hybrid as it confines within science and politics through that way it provides advice to governments and policy makers. Even though it has recently been seen as a body that is not scientifically sound, it is still a body that has played a important role in global governance. Its relation in politics is affirmed with its corporation with the UNFCCC. It is however highly important that politics remains separated from science as it would then create certainty, be able to create better relationships between developing countries and be seen as scientifically sound. The idea of sovereignty has lessened countries that used to be independent now how to follow what has been put in place by the IPCC. Finally, it is clear that the United Kingdom has been very much involved in reducing climate change through the regulations it has implemented, which in turn is done locally within the state but the affects would be seen globally. The battle of it being global or local has been shown and we can conclude that it is a global issues as well as a local one. Deepa Raghwani dr231 ________________ [1] The changing role of nation states in international environmental assessments ? the case of the IPCC [2] http://www.journal-iostudies.org/sites/journal-iostudies.org/files/JIOS1014.pdf - page 62/6 [3] http://news.bbc.co.uk/1/hi/8550090.stm [4] HM Government: ?Analytical Anex: The UK Low Carbon Transition Plan? Pg 24 [5] Paul Brown: ?The Guardian: What is all this Kyoto thing all about?? ...read more.