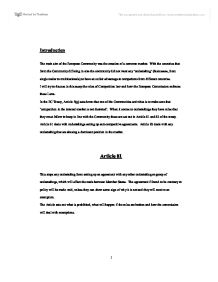 Discuss the rules of Competition law and how the European Commission enforces these Laws.

Introduction The main aim of the European Community was the creation of a common market. With the countries that form the Community differing in size the community did not want any 'undertaking' (businesses, from single trader to multinationals) to have an unfair advantage to competitors from different countries. I will try to discuss in this essay the rules of Competition law and how the European Commission enforces these Laws. In the EC Treaty, Article 3(g) sets down that one of the Communities activities is to make sure that 'competition in the internal market is not distorted'. When it comes to undertakings they have rules that they must follow to keep in line with the Community these are set out in Article 81 and 82 of the treaty. Article 81 deals with undertakings setting up anti-competitive agreements. Article 82 deals with any undertaking that are abusing a dominant position in the market. Article 81 This stops any undertaking from setting up an agreement with any other undertaking or group of undertakings, which will affect the trade between Member States. The agreement if found to be contrary to policy will be made void, unless they can show some sign of why it is not and they will receive an exemption. The Article sets out what is prohibited, what will happen if the rules are broken and how the commission will deal with exemptions. ...read more.

These are: * Commission * European Competition Network (ECN) * National Courts Changes of Regulation 17/62 The Commission up to now is the only body that can grant exemptions. This will change with the new rules coming in from then on the ECN and national courts will be able to give exemptions to undertakings. The Commission will take on the role of giving policy and making sure that the rules are being fair applied. New Merger Legislation The Commission is looking to introduce a Merger Regulation with the new reforms that will go through in May 2004; these will make it much easier to understand the rules when it comes to company mergers. Conclusion In Conclusion it can be seen that the Commission has a very difficult task to perform when it comes to Competition law. On one hand it does not want to stifle companies from trying to invest and grow with the market it is within, but does not want to allow companies to become so powerful that there is no competition. The main feeling I have is that in the days of huge multinational comes that don't care about final end users but only that of shareholders. People will want to look at see that there freely elected representative are doing as much as possible to curtail these companies from having to much influence in there daily life's. In the years to come if people feel that they rights are not being expressed we will find ourselves in a world full of festering hate and greed. ...read more.